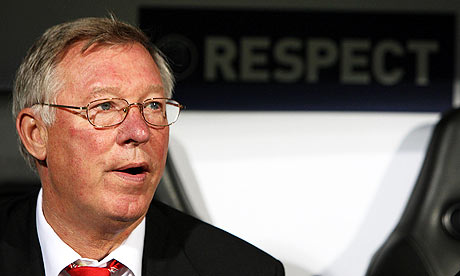 ..just as it says on the tin, really.

Sir Alex has come in for criticsm for voicing his opinion about the physical condition of Alan Wiley. Clearly an attempt to deflect the heat from his side following a poor display but the media backlash which is trying to get Fergie charged with all sorts is bordering on the rabid.

A “journalist” for Football365, Sarah Winterburn, opines that Fergie’s comments were worthy of comparison to Adebayor’s recent antics against Arsenal. He should be fast-tracked to punishment. He should not allowed to explain those comments. Really? Were the comments really that bad? Let’s examine them.

Sounds like an opinion to me, maybe a bit harsh but still an opinion. Is this really a surprise from a website that claims not to have any bias towards or against any club but as recently as March ran a piece urging England fans to treat Rooney as a “non human” which used to be found by clicking this link, strangely since deleted, don’t worry though it can still be found in all it’s glory here.

Incidentally written by the same moron who proudly admits in this same article to instigating a hate campaign against Beckham after the 1998 World Cup. Call me paranoid but I notice a bit of a theme. A website, by the way, that publishes a twice daily mailbox where contributors revel in the opportunity to publish comments about Sir Alex that are so personally insulting I don’t even wish to give them the light of day.

Incidentally, where were the calls for Arsene Wenger to face disciplinary action for saying “you know what you get at Old Trafford” after the recent game where he had no real cause for complaint?

Where were the calls for Benitez to receive the kind of punishment Winterburn craves for Fergie when he launched the most astonishing mis-informed rant in the domestic sports history?

This isn’t a Football365 thing. Examples can be found through the media. David McDonnell of the Daily Mirror wrote the match report for Monday’s pull out “Mirror Mania” declaring
“Predictably, Fergie tried to mask his side’s glaring failings with a withering attack on Alan Wiley, accusing the referee of not being fit, a slur which is likely to incur an FA charge”.
His report was accompanied by an article (again, strangely enough you can’t find it, but here it is) entitled “CLOCK WATCHER TO WEIGHT WATCHER” and read –

To listen to Fergie you’d almost believe Wiley carried in his pocket a yellow card, a red card, and a Diner’s Card.

The tirade could yet land Fergie in hot water – Wiley would prefer a nice leg of gammon in hot water. It was hard to tell on Saturday if the fourth official’s board showed four minutes of added time or four stone of added weight.

Saturday’s was the the latest in a long line of Fergie ref attacks.

He slaughtered Martin Atkinson for failing to give United a penalty in their FA Cup quarter-final defeat by Pompey last season and said refs chief Keith Hackett was not doing his job properly.

And in the Manchester derby at Eastlands in 2006, Fergie launched a savage attack on Steve Bennett for sending off Cristiano Ronaldo.

The article is accompanied by an image of Mike Dean holding up the time board with “4st” mocked on. We’ll forget the chronological idiocy as I’m pretty sure Fergie was relieved we got through last seasons apparent quarter final defeat to the semi final game against Everton. And while Ronaldo was certainly not sent off at Eastlands in 2006, let’s not let the facts get in the way of a good story.

Confusingly McDonnell’s colleagues at the Mirror (primarily a chap called David Anderson in this article) seem to deem an opinion that a referee was simply “not fit enough” as something deserving the “book thrown at them”, wanting at least a fine and a ban. I wonder what they make of one of their colleagues saying that same referee was a “roly poly” who “would prefer a nice leg of gammon in hot water”.

Complaining or writing in to football365 is pointless because they don’t respond and basically take a fingers in ears approach to anything that contradicts their shitty journalism.

Does David Anderson or the Mirror feel that McDonnell’s comments are worthy of a similar suspension from his job? Do they feel that Oliver Holt’s insult that Sir Alex is a “sneering bully” is fair?

Well, I’ve emailed them and I’ll keep you posted. But don’t hold your breath.

2 Comments on Football365 and the Mirror must stop Fergie witch-hunt. Now.