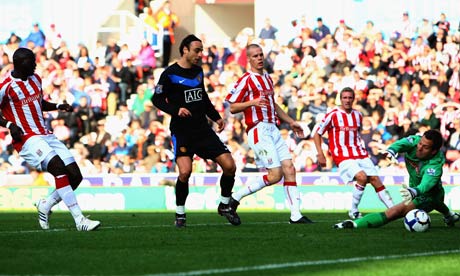 What increasingly looked like a banana skin for Manchester United ended up as a comfortable routine 2-0 at Stoke City that sent the Champions to the top of the table for the first time this season, but only thanks to divine intervention that came in the form of two Ryan Giggs’ assists as the Welshman came from the bench to rescue the game.

In a dour first half, there was a half shout for a penalty when a Paul Scholes drive hit a Stoke defenders hand, but referee Howard Webb waved away the claims. Giant defender Huth was booked for a lunge on Scholes, and only the midfielders quick feet prevented what surely would have been a nasty injury, while Luis Valencia squandered a chance to give United the lead.

Nani had an opportunity in the last few minutes of the first half but Stoke keeper Sorensen was equal to it. Nani’s performance was probably the main talking point of the first half – the Portuguese wingers’ form has often polarised fans and this latest outing was certainly one for the frustration pile.

It was Nani who made way for Giggs when his second half showed no indication it was ever going to improve and while Giggs’ showing last weekend may have indicated he would make a difference few would have predicted how quick that impact would come.

After less than 7 minutes the answer came, when the wingers trademark pass across the goal was converted by Berbatov. The goal afforded the visitors a degree of calm and assurance while Stoke’s system reshuffle did them no good. There was only going to be one winner from this point and the three points were secured when Ryan Giggs again – who else – was provider from a whipped free kick that John O’Shea rose perfectly to convert.

It was hardly the most fluent performance from United but they were never really in danger, and at a place like Stoke that is no mean feat. Indeed it may well be that Sir Alex will take greater satisfaction at some degree of normalcy being resumed at the back.

Berbatov’s goal may not on its own silence the ever growing list of doubters, while Nani’s performance will cast further doubt on his progress, but in the evergreen Ryan Giggs – who has now provided a staggering 8 goals for his team mates already this season – United have a creative force that appears to have no equal in the Premier League.