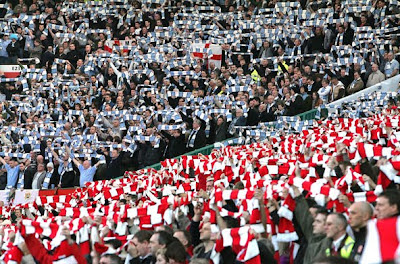 On my way back from the capital earlier this week the long train journey afforded me an indulgence I don’t take too often, that being the reading of the good old fashioned printed word. Of course I keep upto date with all things football but that generally is done either online or via Sky Sports News.

There was an interesting piece in the Telegraph by Henry Winter that was invitingly titled “Premier League missed a trick with Manchester United centenary fixture “. The article is essentially referring to the 100th anniversary of United playing at Old Trafford which is due to be celebrated on the 19th February 2010.

Winter’s point is that there should be a “romantic” dispensation regarding fixtures and suggests that United hosting Liverpool on the weekend of the anniversary just as they did in the very first game. He closes with the paragraph:

“Sadly, the fixture computer does not boast a romantic button, allowing schedulers to make allowances for momentous club dates, but it should do. This is not tinkering with the present, simply honouring the past. A sport that forgets its roots forgets itself.”

It’s certainly an interesting topic. My two pence? Well, I completely disagree with the entire principle of it. The reason being is that it’s the unpredictability of such events that actually define the romance that Winter so wistfully pines for. The event such as the one illustrated in the image for this article, for example. Who could have predicted that a Manchester derby at Old Trafford would be the game straight after the 50th anniversary of the Munich disaster?

Such occasions are part of the very fabric of the football club we love. On what would have been Sir Matt Busby’s 90th birthday we won the European Cup, a competition that in entering Sir Matt was a domestic pioneer. In the 50th year after Munich the current squad vicariously fulfilled the forever unknown ambition of their predecessors. Ryan Giggs scoring the goal to clinch the title in his record equalling appearance for the club; scoring the goal that won the Champions League as he became the holder of the appearance record. Paul Scholes scoring on his 500th appearance against Liverpool. A 17 year old coming off the bench to score at the Stretford End and revive United’s flagging title hope in a campaign they could finally level Liverpool’s championship tally. A “washed up ex-Scouse free transfer” scoring an injury time winner at the Stretford End in a Manchester derby.

The beauty of all these occasions, aside from the fact they are success stories for the club? That not one of the occasions were contrived, not one of them were manipulated to add romance to the event.

It would have lent an air of romance if Liverpool were the visitors that weekend (coincidentally, we’re in the city, playing Everton), but not if it were pre-determined. While I agree with Winter’s sentiment I would say that such manipulation would not add the romance to the occasion; rather completely strip it of it.

United fan Jake Chorley has found himself with a 3 year ban from attending football matches for invading the pitch in the Manchester derby. Chorley is 21 and reportedly has a couple of charges to his name. Craig Bellamy ran 20 yards to confront Chorley who was already restrained by 4 stewards and felt it necessary to slap the defenceless kid. Bellamy, you’ll probably already know, was let off with a “warning”.

You can draw your own conclusions but in my view there is not that much difference in principle between this and the Cantona incidents. Obviously Cantona’s outburst was more violent than Bellamy’s but the point is about the reaction rather than the action.

Still, what can you expect from an FA that has shown such staggering inconsistency with such high profile cases as the Christian Negouai/Rio Ferdinand drugs tests or the Roy Keane / Jamie Carragher (not just once, but twice) autobiographies?

To finish on a more positive note and to return to the earlier point. Tonight marks the 5th anniversairy (technically it was Monday, but in terms of game dates) of Rooney’s debut with a hat-trick. He’s 20/1 with William Hill to get one tonight. What do you think?