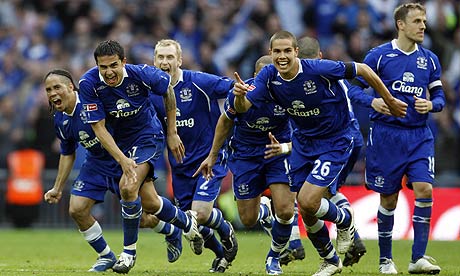 Sir Slex Ferguson made 8 changes from the side that beat Porto and paid the ultimate price as his dire Manchester United team lost on penalties to Everton, therefore being eliminated from the FA Cup and the chance to become “quintuple” winners.

Using his examination of the previous days semi final and the impact the occasion and pitch had on the players of fellow Champions League semi finalists Arsenal and Chelsea, Ferguson took a huge risk by throwing in youngsters Rafael, Fabio, Gibson, Welbeck and Macheda while starting with Ben Foster in goal.

It would perhaps be too harsh to be so insulting to the youngsters who made a good fist of the performance and in fairness were the stand out performers in pushing a seasoned, professional, experienced and very talented Everton side all the way to penalties, and even having arguably the better of the play in normal and extra time.

The game itself presented few chances – among the best were ex-Red Devil Saha’s chance after a Foster mistake which the keeper just managed to recover, Welbeck’s deflected effort that grazed a post, Cahill testing Foster from distance, and Gibson doing the same to Howard.

But the major talking point came when Phil Jagielka clearly took out Danny Welbeck as the youngster seemed to create an opening to shoot, and referee Mike Riley, who David Moyes had accused of being a Manchester United fan in midweek, waved the claims away. Fergie was furious and his anger will no doubt have been two-fold considering the incredible number of clear set piece opportunities that have been denied his side over the last 18 months due to manipulation of the officials.

Such a result would have been harsh on Everton on the balance of play as only Anderson and, as ever, the two United central defenders Ferdinand and Vidic left the field with any credit for the favourites.

The biggest disappointment of the day was the introduction of record signing Dimitar Berbatov who contributed so little after his substitution that Fergie must have wished he had left wonderkid Macheda on – this feeling probably was exacerbated when Berbatov hit a woeful penalty in the shoot out straight at Howard.

A kick in such a situation would not normally be considered a great crime but Everton had missed their first spotkick and the Bulgarian had a great opportunity to establish some momentum for United, however his effort mirrored his awful attitude and body language. It was no surprise that the Toffees were bouyed by the miss and went on to convert all of their remaining kicks (Ferdinand missing the second kick) and in doing so progressed to the FA Cup final for the first time since they beat United there 14 years ago.

For United the quintuple dream is over but they must find some resolve as the next 6 days – two home games against Portsmouth and Tottenham – could prove crucial in their defence of the Premier League.