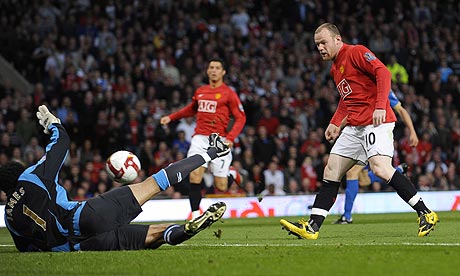 Wayne Rooney and Michael Carrick scored the goals that returned Premier League Champions Manchester United to the top of the table with a 3 point lead and a game in hand in a comfortable display against Portsmouth.

The first half saw the home side really for the jugular and they started the second half in similar fashion, only to tail off and almost give Pompey a glimmer of hope before Carrick’s late goal sealed it.

Sir Alex Ferguson sprung a change or two in his line up, opting for Rooney up front while not starting Berbatov or Tevez, and playing Anderson despite the talented youngsters exerts in Porto and then the two hour performance on Sunday.

But it was Anderson, and veteran Ryan Giggs, who dictated the early exchanges, Anderson’s logic defying high energy display perfectly complementing Giggs’ intelligent use of the ball – it was no surprise that this combination led to the opening goal after just nine minutes, the Brazilian finding the Welsh legend with an out of this world 45 yard pass, the winger producing one of his trademark slide rule balls, with Wayne Rooney accepting the opportunity to slam United into the lead.

Chances followed as Anderson’s improvisation almost brought him a first United goal and Giggs movement created two great chances for him, though doubters may point towards profligacy for the reason that the opportunities were spurned.

Fletcher had an opportunity and Ronaldo began to creep into the game, while O’Shea had an effort cleared off the line – but it took Michael Carrick, on for the tireless Anderson, to seal the result. Paul Scholes, in his 600th appearance in a United shirt, played a ball that has long been his trademark, allowing his midfield partner to rely on his own ability and composure to steer the ball into the corner of the net to ensure United’s return to the top of the table.

Rafael and Ronaldo had later chances to add a greater gloss to the final scoreline but all attention will now be focussed on the Saturday teatime fixture with Tottenham – a crucial component of the 13 point obstacle between United and an 18th domestic league championship.