‘You need Ruud back’ was a number of comments heard early season directed at United by many fans rubbing their hands with glea at the sight of us scoring one goal in our opening three matches. Never had it dawned that we had just come to the end of the longest transfer wrangle in the history of the world regarding an unfit Carlos Tevez and also we were without Rooney and Ronaldo for most of those games. What even more laughable is that we dominated all three games and should have taken at least seven points from a possible 9. The critic had already seen our problem – we needed an out and out striker.

From the moment I heard we were in for Tevez I knew that he would be a hit. He has the physical and technical capabilities to succeed at United but he also has heart and courage to play on the biggest stage at Old Trafford. I think he’s been brilliant in most of the games he’s played this season. The only game when I though he was poor (along with the whole side) was the Spurs game. Against Wigan he was superb as he was against Chelski two weeks ago. He really is a Manchester United player and people will soon start to realize what an amazing talent he is.

The problem with signing Tevez for some people wasn’t that he lacked the talent to play with United but that he was too similar to Wayne Rooney. Yes they are similar in stature and also prefer to play off the top man and drop deep to receive the ball, but who says you can’t succeed with two forwards like this? The movement of the front four is incredible. Rooney and Tevez can drop deep whilst Ronaldo and Giggs can come inside and move up top and many teams simply do not know how to deal with such attacking talent. Add in Nani and Anderson combined with vision and grace of Scholes and Carrick, we really do have a frightening side. It was just a matter of time before the goals came flooding in.

I picked up on a comment by ex-Wolves forward Don Goodman whilst watching ‘you’re on sky sports’ last week. A caller phoned in (a red) and wanted to know the ‘experts’ opinion on why United were failing to score. Goodman responded with ‘I don’t believe Rooney and Tevez can play together as they’re too similar, I mean they’ve played a number of times together already’. As he said that I could feel the backtracking in his voice and the hesitation of his tone. ‘Have they played much together? Are they really that similar? Do I actually know what I am talking about?’. I don’t believe he does. How on earth can you say they’ve played a number of times together! I honestly don’t know how some of these people get employed.

Did anyone else see this show? What does everyone think of the Rooney/ Tevez partnership? 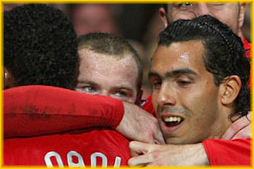