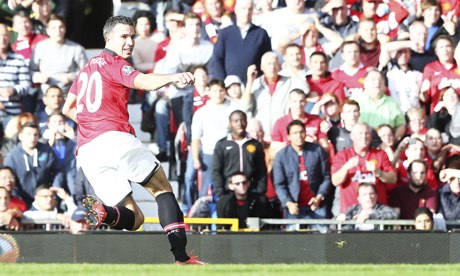 As the international break with England’s success and jokes of poor taste were left in the past, Premier League football returned. Southampton came to Old Trafford in fine form and frame of mind but there was a feel-good factor at United after Januzaj’s double at Sunderland and subsequent new five year contract announced a few hours before kick-off. Moyes made two changes from that game as Vidic was replaced by Evans (presumably with the Champions League in mind) and Fellaini replaced the injured Cleverley. Southampton also made two changes to their side with Shaw and Rodriguez replacing Fox and Lambert. We welcome comments from both sets of fans.

Reading this knowing the score means you’ve probably already got a settled opinion on yesterday’s game. Chances are that because United dropped points that opinion is one of yet more doom – that we were dominated and it was our ‘worst-performance-ever™’. Being the optimist (or attempted realist) that I am, I don’t quite feel that way, unsurprisingly.

Match stats will suggest that Southampton had more shots, more possession and attempted more passes than United. On paper it might seem that United were second best but for long chunks United were both in control and assured. The movement of the forward players, particularly Nani and Januzaj was unpredictable and a Southampton side that boasted a stupidly impressive defensive record found their back-line breached on quite a few occasions.

Nani in particular was getting things right. He was picking his moments to cut inside at the correct times; balancing out the tricks with the right moments to pass; and tellingly, making a key defensive contribution – winning every tackle he attempted, all of them inside our own half. The style of play, speed of play, movement and chances created were all much better and all that was needed was the second goal…

When momentum changed and the inevitable happened

Unfortunately for David Moyes, it was his first substitution that really started to change the feel of the game. The idea of bringing Giggs on seemed fine – he hadn’t played since the last 25 minutes in Donetsk two and a half weeks ago so would be fresh and might be able to help get the second goal with an attacking contribution and some know-how. That he replaced Nani was strange though. As already noted, Nani had been playing well and didn’t seem to be showing any signs of fatigue. He’d constantly wanted the ball and was making things happen when he had it. By contrast, Januzaj had started to look a bit leggy, as he had done at Sunderland. He’d not quite managed to have the same impact as he had in that game particularly as both Southampton fullbacks had pressed him tight knowing they had the beating of him for pace. He’d also taken his fair share of whacks, fouled on 6 occasions (and every time got up without a complaint). His pass that created the opening goal was yet another sign of his incredible talent and although he was by no means sub-standard, if one of the wingers was to be withdrawn it should have been him.

Bizarrely Giggs came on and moved to the right hand side with Januzaj going out to the left where he’d started the game. Suddenly the feel of the game started to change. Maybe content that Southampton, who’d only really had half chances (even if in abundance), weren’t going to come close to scoring, players seemed to move down a gear. Evra suddenly decided tracking back wasn’t for him; Rooney wanted to try and beat players in his own half; Fellaini became increasingly casual in possession and others followed suit.

All of a sudden Carrick was alone in the middle – Giggs was now meant to be there with Welbeck replacing Fellaini but his attempts to get back and help were laboured despite still being fresh in the game. By the time 80 minutes were up, United still hadn’t got a second goal and Southampton suddenly had hope – they had something to play for… they might as well throw men forward and lose 2-0 than not try to take any risks with the game still up for grabs. Pochettino recognised this and replaced a defensive minded midfielder with an attack minded one as Do Prado came on for Wanyama.

To his credit, Moyes recognised there was an issue in the middle as momentum swung in Southampton’s favour and he replaced Rooney, who’d been poor, with Smalling, pushing Jones into the middle. The change didn’t disrupt the United backline as Smalling immediately made a crucial clearance to deny Southampton a chance.

However the inevitable happened. And you could see it coming. Not because Southampton had been pummelling United’s goal or out-playing United, because they hadn’t. But because United had missed good chances: hit the bar twice; had a goal ruled out for offside; had another couple of tight offside calls; had been denied a very obvious free kick on the edge of the box; Boruc had made a couple of fine saves; and one too many of those low crosses that go along the six yard box had been missed by everyone. That United couldn’t get that second goal gave Southampton hope and when Shaw was told to reposition the ball at a corner on 88 minutes and then moved it again once the referee had turned (much to the annoyance of a very vocal 70+ thousand people) you just knew they were going to score.

On one hand, fair play to Southampton, they’d done ok and had some individuals who’d performed particularly well. On the other, it felt like a massive kick in the testes/ovaries as this just shouldn’t have happened. This wasn’t a West Brom or Crystal Palace at home performance, this had been better. Where blame lies is ultimately debatable: the players who didn’t take the chances? Moyes for his initial substitution? Or the defending from the corner – allowing the ball to be flicked on to hit Lovren despite the fact there were 9 United players in the six yard box at that moment?

Understandably, Moyes had gone into the season placing faith in Ferdinand and Vidic. Whilst fanboys moaned that Kagawa wasn’t in the team, Evans, arguably our best centre back for the last two years also couldn’t get a look in. With Ferdinand injured and Vidic preserved, Evans made just his second league start of the season and excelled.

Off the ball he was excellent, martialling the rest of the defenders and constantly shouting and pointing in an animated fashion at where he wanted those around him to be. At a young age he’d been earmarked as the kind of player who’d make a good captain and it remains obvious that leadership qualities come naturally to him and don’t impact his performance negatively as if a burden.

When called into duty on the ball he was more than comfortable, showing quick feet and speed of thought on numerous occasions to help get United out of a tricky situation as Southampton pressed high. He even took it into his own hands to inject some momentum into the game as he went on a few surging runs, carrying the ball out from the defence deep into the Southampton half. His partnership with Jones looks like one worth persevering with and it’ll be down to Smalling to deliver equally high levels of performances when he next gets a chance at centre back.

Whilst good sportsmanship, it was strange to see both tiers of the Stretford End clapping off the Southampton players as they celebrated their 1-1 draw. Maybe it’s a sign that we’re just all getting a bit too darn soft at the moment and we should all be a bit like Rafael was at full time, evidently distraught and angry. Still, they’ll be delighted with a point whilst for us, it’s yet more frustration particularly as a win was so close and so deserved.

Van Persie’s well-finished goal, was our first in open play at Old Trafford this season in the league and it’s already gone mid-October. That we’re only averaging a goal a game at home is a concern and it’s very much a mixture of poor finishing and not enough chances created. Teams are playing against us and rather than being firmly beaten, they’re being given encouragement as games are so tight and we still seem to have an error in our play somewhere each game.

If there’s an overriding emotion right now with regards to David Moyes then for me it’s sympathy. Everything he tries seems to go wrong, he’s desperately low on luck with so many games and key moments being settled on fine margins that could go his way as easily as they’ve gone against him. His substitutions yesterday could have been better but they really weren’t that bad and yet he’s getting slated by some for trying to preserve a win with little time left. Maybe that’s not the ‘United way’ but imagine if he’d gone in search of a second goal that late on and we’d been hit on the break – he’d have been criticised for not protecting what we had. Right now he can’t win but he badly needs his players to start to play for him because too many seem to be coasting along – they should be making a huge effort for him whilst he settles in and learns because right now they’re letting him down.

Europe could again be his saviour in midweek with two good performances in that competition so far. (Ironic given that many worried about his ability to manage in the Champions League more than anything else.) A win against Sociedad should hopefully set things up nicely for Stoke, the league’s lowest scorers. What could possibly go wrong…?

15 Comments on United 1-1 Southampton: Saints punish United for not scoring a second