Manchester United against Manchester City must be one of the biggest domestic rivalries in Europe at the moment.

Both teams have looked impressive during the current campaign, and there has been a lot of excitement any time these two fierce rivals meet each other. But which side has the edge when it comes to their recent history? Let’s dive into the numbers to find out.

If we only account the Premier League matches, then City the edge but once again the margin is quite slim. The Citizens register nine wins, against eight from United and three draws.

The recent games show a lot of parity as well, as there have been two wins for United, two draws, and one win for City in the last five Premier League matches. They played a scoreless draw the last time out in April 27 this year.

Manchester United have a 4-2 edge on domestic cup competitions against City. They won a Community Shield battle in the 2011-12 campaign, an FA Cup tie during the same season, and a two-leg Carling Cup tie during the 2009-10 season. They also won 1-0 in the Carabao Cup last season with a goal from Juan Mata. The Spanish playmaker placed the ball past Willy Caballero after a slick touch from Zlatan Ibrahimovic inside the box.

The one time City eliminated United in a cup competition came during the 2010-11 season. The Citizens won 1-0 that time with a Yaya Toure strike in the 52nd minute, but overall United have looked dominant in cup competitions against their city rivals.

Undoubtedly, Manchester City are in better form at the moment. Pep Guardiola’s men sit at the top of English Premier League with 43 points after 15 matches. Meanwhile, United sit in second place eight points behind them. This match is not going to decide the title race, but it is going to have a major impact despite the fact it’s still early in the season. A win for City would give them an 11-point advantage, while a win from United would shrink The Citizens’ lead to just five points.

Manchester United defeated Arsenal the last time out, while Manchester City topped West Ham United at home. Both are coming off Premier League wins, so both sides will be in high spirits for this one. Both ended their respective Champions League group stage campaigns at the top of their respective zones. 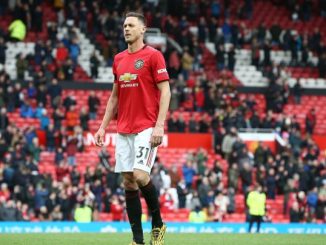