Manchester United scored a late equaliser to deny Liverpool their first win of 2017 in a game where the home side were well below par based upon recent performance levels. Player of the month Zlatan Ibrahimovic headed home a Antonio Valencia cross, following Marouane Fellaini’s effort that rebounded off the post. It was the Swede’s fourteenth league goal for United, who is now the joint top goal scorer in the Premier League (alongside Diego Costa and Alexis Sanchez), and maintain their unbeaten league run to twelve games, although Jose Mourinho will be extremely disappointed that his side were not able to close the gap on his former side Chelsea and now see his Unites side twelve points off the top.

Jurgen Klopp set up his side to nullify United building any momentum from the back, and it worked extremely well in the first half with the home side relinquishing possession following the high press of Liverpool’s front six. The German manager opted to push both Roberto Firmino and Divock Origi wide to put pressure on Valencia and Matteo Darmian, whilst Adam Lallana was deployed at the tip of a four man midfield diamond, which left centre halves Phil Jones and Marcos Rojo marking space. Liverpool took full advantage of Paul Pogba’s handball in the penalty box, with James Milner slotting home past David De Gea.

It is the first time both sides have drawn both home and away since 1987/88 and although United rescued a point in a game where Liverpool led for so long, it is a disappointing result for a side that have been in brilliant form of late.

Klopp got his tactics spot on in the first half and ensured that Mourinho’s men were not able to get into their usual rhythm. With United’s players amassing a distance of 110 kilometres over the course of ninety minutes, Mourinho’s men fell 9 kilometres short of the away side – which was a result of their high pressing throughout the first half. Origi looked dangerous down the flanks, constantly looking to take on Antonio Valencia on United’s right hand side whilst the midfield resembled a pinball machine – with no player being given any time on the football. United were unable to get the ball into Ibrahimovic’s feet and didn’t move the ball quick enough to wide areas to utilise Martial and Mkhitaryan, although the wingers didn’t make the most of the ball when they were indeed in possession.

To highlight how effective Liverpool’s pressing was on United’s defence, take a look at Phil Jones’ distribution in comparison to the tie against another (usual) high pressing side, Tottenham: 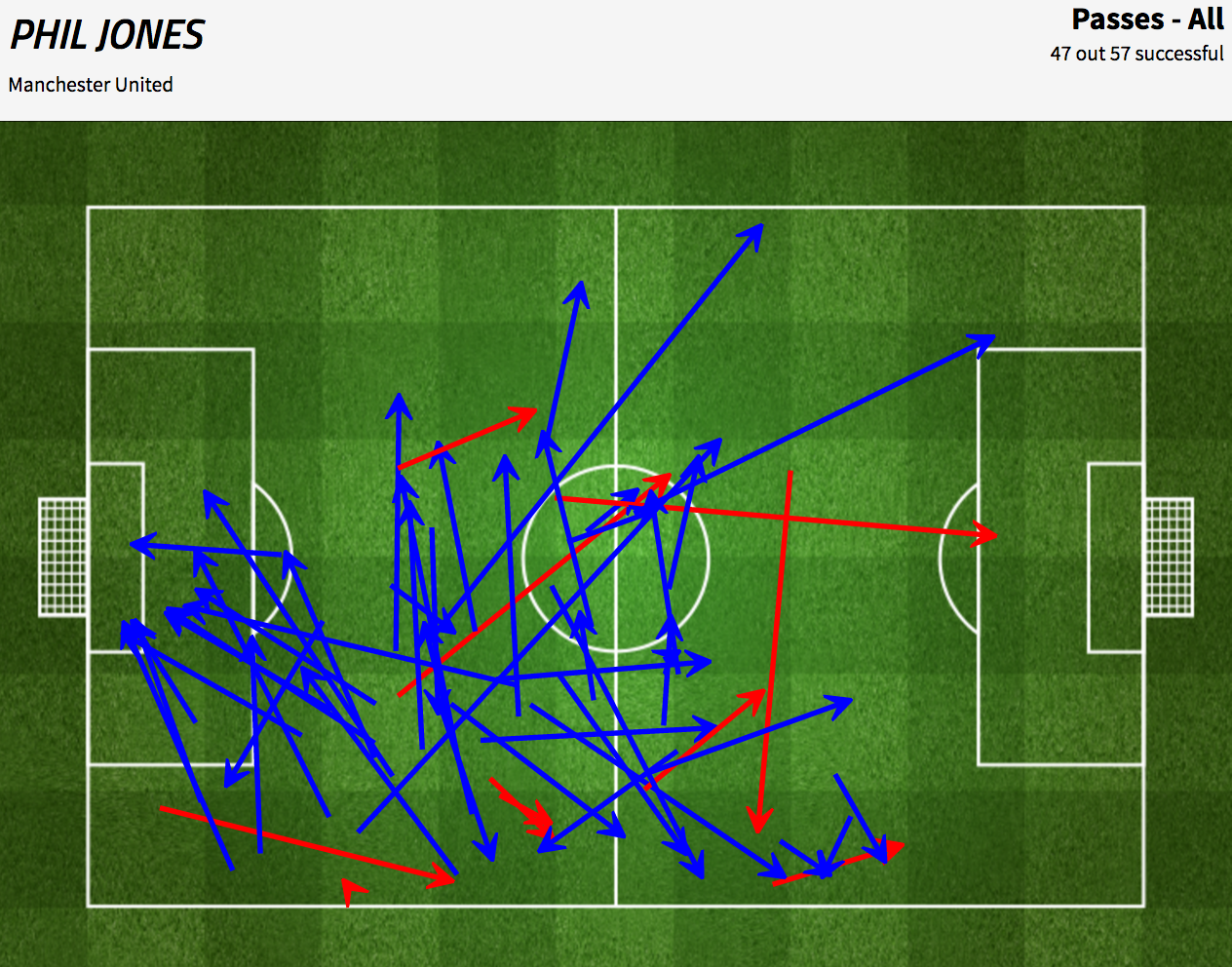 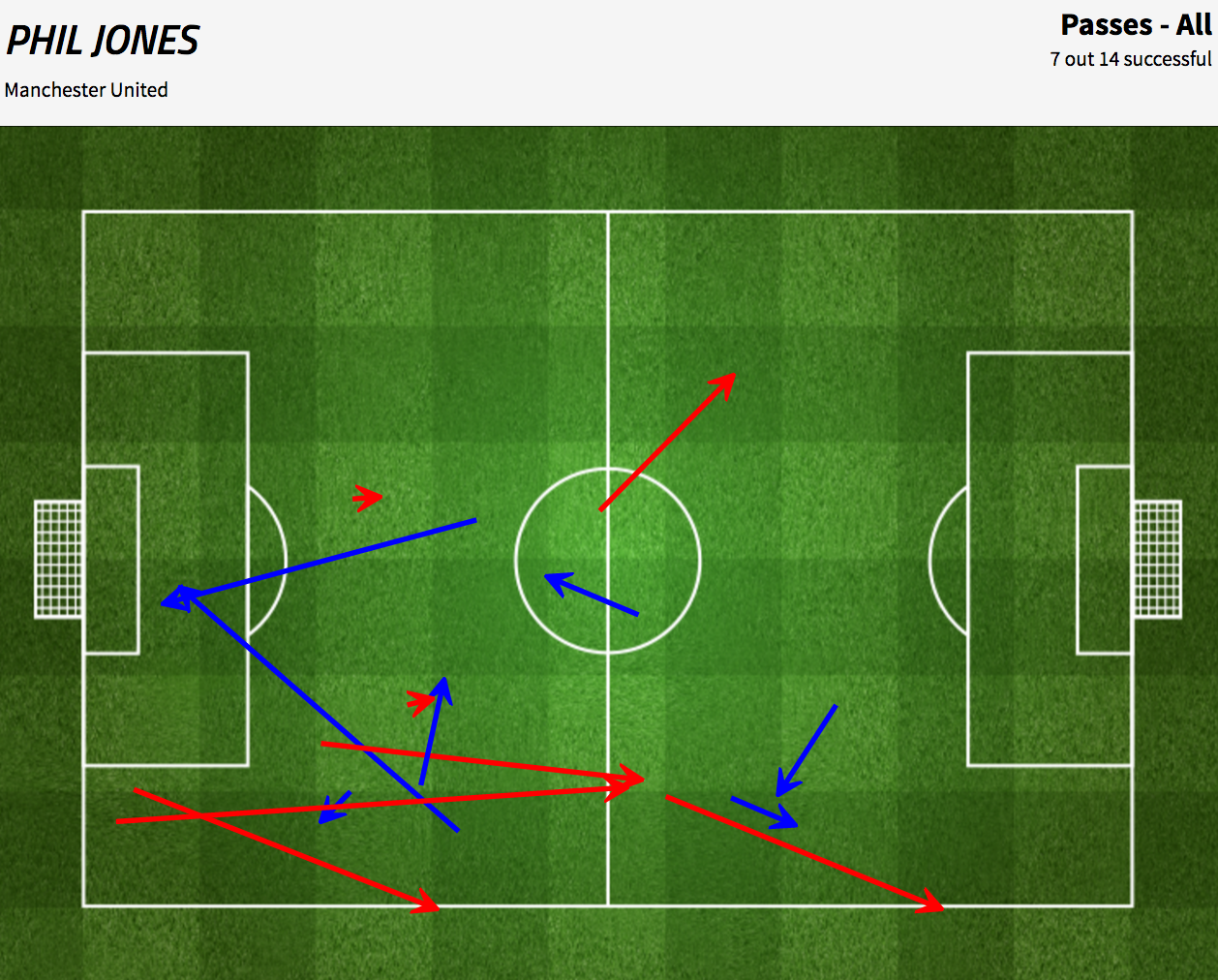 Mauricio Pochettino adopted a different approach against United on that day, more possession based than high press, which is why both Jones’ and Rojo were limited on the ball. Against Liverpool, the only two free players were indeed the centre halves and were eagerly closed down as soon as they received the ball. Jones was guilty of using De Gea too much in the second half, when the press wasn’t so high, however – this was due to a shift in tactics by Mourinho to go more direct. Once United started getting a foothold in the game, Klopp brought off the energetic Origi for Philippe Coutinho who slotted in effortlessly on the left as the away side reverted back to a 4-3-3.

Liverpool had a chance to double their lead when Coutinho, who had only been on the field for a minute or so, played in Firmino who struck the ball at De Gea, whilst in the dying moments Georginio Wijnaldum had a glorious opportunity to snatch all three points, but unleashed a tame effort. Klopp felt his side played the “better football” in a “wild game” where United played a number of “long balls”. Although Liverpool made is difficult for United to play their usual game – the German will have acknowledged the chances the home team squandered.

Below par United and missed chances

Scoring a late goal to save a point against your arch rivals would usually be considered a point earned and a good result but in the grand scheme of things, United were well below par considering how well the side have played over the past few weeks. However, the opposition were of better quality to what has faced Mourinho’s men over the festive period. As mentioned, United couldn’t play their usual game due to Liverpool’s high press to nullify any momentum to build from the back. Michael Carrick was withdrawn at half time as he looked out of sorts in a fast paced game, whilst his midfield partner Paul Pogba will quickly want to forget this game.

Pogba, who has been excellent in recent matches, had a nightmare of a match – missing a glorious opportunity in the first half, which would have given United a lead. The Frenchman snatched at a through ball by Mkhitaryan to shoot wide of Simon Mignolet’s goal. United’s summer signing was erratic when in possession, looked at sea when marking Dejan Lovren and handled the ball to give Liverpool an opportunity from the penalty, which of course Milner duly took.

His composure deserted him and everything that he tried from short quick passes to a back heel, just didn’t come off. He was joined by Anthony Martial, who started very brightly – but didn’t take his chances to drive at debutant Trent Alexander-Arnold and was replaced by Juan Mata midway through the second half. Henrikh Mkhitaryan was also guilty of missing two glorious opportunities, with one being very well saved by Mignolet. The Armenian also lashed a second half low cross, which was nearly converted by Martial who attempted to back heel the ball into the goal.

Although United were below par, it showed great character to get back into the game and showcased Mourinho’s tactical nous. Ander Herrera was excellent in the middle of the park and was United’s best player throughout. Fellaini caused havoc when he was brought on and United looked to go more direct in order to find an equaliser. Jose Mourinho believes that Liverpool will be happy with the point and that United had numerous chances to claim the victory:

“I’m not happy. Whether it’s good or bad, I’m not happy. When are you losing and score in the last part of the game, the team that concedes the goal feels worse than the team who scores, but in the end we lost the points because we were playing for three. And the way they played, I think they were happy with the point, so probably they go away happy.”

“We missed important chances. I saw good saves by the goalkeeper, I saw Mkhitaryan backpassing the ball [behind Martial], I saw the Fellaini ball hit the post. I saw so many things happening then but the goal was not coming. Finally, the goal came and I repeat: with a few more minutes, we win the game. But no more minutes.” 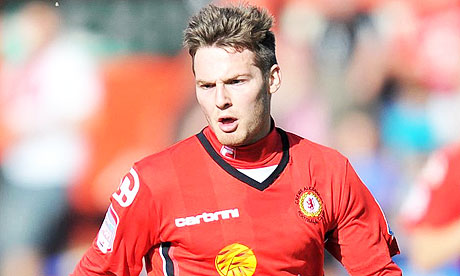