Manchester United beat Arsenal 2-1 at the Emirates in November

Manchester United, who have all but qualified for the Champions League next season, do battle once again with FA Cup finalists Arsenal in a game which could see the home side swap places with the Londoners with a victory. United will be without their skipper, Wayne Rooney, who is still suffering from picking up a dead leg injury last weekend against Crystal Palace. This could mean a start for ex-Arsenal skipper, Robin van Persie, who has no doubt struggled for form since Sir Alex Ferguson departed at the end of his quite brilliant debut season.

Luke Shaw is also set to miss the game following his injury in the fixture last weekend. Louis van Gaal also spoke of the upcoming Euro U21 tournament in the summer, which he feels Shaw should miss in order for his body to recover.

We caught up with Peter who blogs over at Le Grove. We asked him about who was better our of Scholes/Fabregas, how nervous is he in the build up to the FA Cup final and are Chelsea worthy Champions. You can follow Le Grove on Twitter @LeGrove.

1) What happened the other night against Swansea and are you now concerned that United could well finish above you?

We’ve been on a pretty steady run of wins in 2015, that run came to a crashing halt when Swansea parked the proverbial bus. Some fans are calling it groundhog day and a sign that nothing has changed, I’d say we lined up against a good team with a game plan and we were sucker punched. I’m not really concerned United will finish higher, I’m concerned Arsenal won’t finish higher than Manchester City. That’s been the goal for a long time, we were within touching distance and it now looks like we could have blown it.

2) How would you sum up the season and have you made progress?

We’ve made huge progress November onwards. We had the worst start under Wenger, a blend of naivety, poor fitness in the squad and a squad that looked like it had never played together. The second half of the season, players have found their style, the manager has to also take a lot of credit for the changes he’s allowed his team to implement. Our fitness coach, Shad Forsythe (German world cup winner) has had made a massive impact on the injury list. Our players are fitter, fresher and less likely to be found in the medical room. We’ve also started working harder on tactics. Steve Bould works with the team on video analysis, scenario planning and we now look at the team coming to play us. Not revolutionary, but a massive shift in the right direction for us.

3) Is Arsene Wenger still the right man for the job? How long will he remain at the helm?

He’s the right man for the job as long as he’s progressing. Things haven’t suddenly come right for him because of his stubborn vision of how football should be won has come to fruition. It’s come good for him because he’s accepted he can’t progress the club on his own and he’s utilising his team and resource better. He’s done a very good job in 2015. He now has to finish the job. Swansea was a sharp reminder that we’re still not there. But this summer, with the right players, the right preparation and the right attitude… well, you never know where we could be next season.

4) The Monaco result was ridiculous considering the superiority of Arsenal, but it always keeps happening. Why aren’t Arsenal winning these games and can you ever reach the European Cup final again?

We got to grips with planning for the bigger teams, notably Manchester City away. We didn’t quite pay the same respect to Monaco, who were a small team we thought we’d kill off without much thought. It’s a massive concern that we’re a long way off the pace in Europe. I think this weeks semi finals have shown how far off all the English clubs are. But I’m not concerned, the new money about to flood the league will see English clubs dominate again soon. I have every faith we’ll win a European Cup within the next eight years.

I was around for boring, boring Arsenal and I loved it. Jose is a pragmatist. You exchange beauty for trophies with him. He does the job. Question is, how satisfying is it as a Chelsea fan to watch elite Stoke City football? Trophies don’t have to come at the sacrifice of style, despite the protestations of Jose. I think he takes the joy out of the game. He’s the Floyd Mayweather of football. Some love it, I don’t. Especially when you have the resource and players to play in a better style.

6) To the FA Cup and you must fancy your chances against Villa? Going back to past 25 years, what is your favourite FA Cup victory?

I’m absolutely torn on the FA Cup. I’d have fancied us against Liverpool. Aston Villa feels a bit like Monaco. Tim Sherwood is, despite my early misgivings, a very good coach. He’s a shot of enthusiasm. He has Villa playing with confidence, style and ambition. Anything can happen on FA Cup final day and all it’d take is an early goal to throw our game plan.

It should be a win… gut feel says it’s going to be a horrible afternoon.

7) How would you sum up United under Louis van Gaal? What have you made of Depay signing? Can you see Gareth Bale at United next season? Will De Gea stay?

Last time I wrote about him, I said he was a fraud. I’ve softened, but I’m still not sure he’s the man to take you back to the glory days. I think he’s brought some pride back to United. He’s set out a game plan and he’s rigidly stuck to it and he’s delivered 4th place. I think some of his signings have been embarrassingly poor. I think he’s very much about himself. But you can’t argue with a manager who reinvigorates Ashley Young and makes Fellaini a focal point of a top four side.

This summer will be fascinating, you have CEO who hasn’t said no to a single managerial request since he arrived, a manager who loves splashing the cash… you’ll be a force to reckoned with next season. Especially if you land Bale. Which would make me really sad. He’s a monster of a player and exactly the type of signing United always used to make. I also think we’ll see the real Di Maria next year. He’s an incredible talent and if he comes good, you could have quite a frightening line up.

I’m not sure what’ll happen to De Gea. Valdes is a very good back up, but he’s nowhere near the level of your current number one. Arguably the most important signing of the summer is keeping him in the mix. I know Madrid are appealing, but I’d be looking at the way their fans are treating Casillas and how they’ve rounded on Ancelotti. Do you really want to put yourself in that environment? I wouldn’t.

8) The big questions, you can only pick one out of the pair:

Schmeichel/Seaman: I always had a soft spot for Dave. A safe pair of hands, a good shot stopper and a leader.

Ferdinand/Adams: On pure football ability, it’s hard to look past Ferdinand here. A great passer, a European Cup winner and a dominant force for so long.

Keane/Vieira: Vieira for me was total football. A class apart and a gentleman in the Roy / Patrick interview. Watching those two going toe-to-toe was a thing of beauty, but Patrick for me stood out as the better player.

Scholes/Fabregas: Fabregas, despite what we’re seeing now. His ability to find a pass to anyone, from any position was a sight to behold.

Cantona/Bergkamp: Dennis for what he did for Arsenal. He started it all. One of the greats.

Ronaldo/Henry: Thierry all day. Majestic, creative, selfless, selfish. He ruined my expectations of what a striker could be. Nothing matches up. The full package.

9) Arsenal won recently at Old Trafford, the first time since 2006. What will the score be on Sunday?

I think Arsenal will win by one goal. I’m not sure the game is going to be much of a spectacle. I think we’ll go with a similar plan to the one we had for the FA Cup game. It’ll be tough, we’ll try to break with pace and we’ll work hard with two defensive midfielders to counter your strike force. A big game with next season firmly in mind for both managers.

10) What is your all time Arsenal Xi?

This probably changes every time we speak. This is the team I’d play against United this weekend. 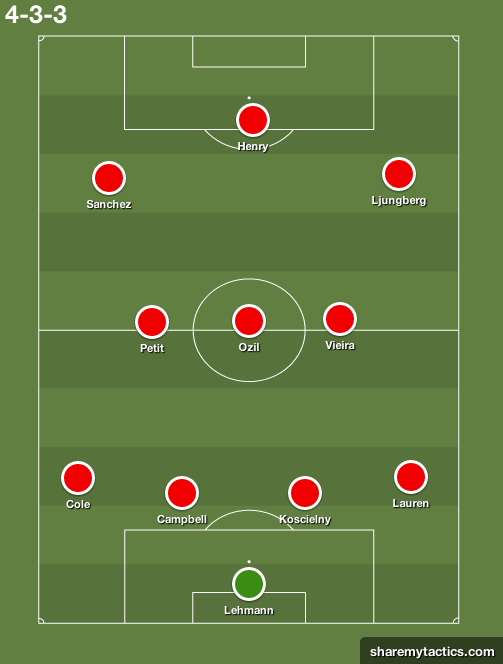 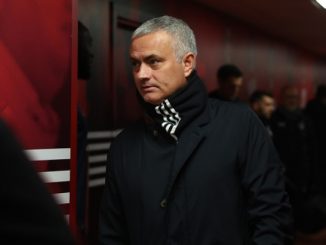 1 Comment on Manchester United vs. Arsenal preview: view from oppo