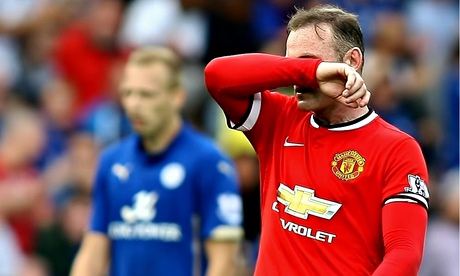 “Football, bloody hell!”. A phrase that is generally used when something quite unexpected, baffling and absurd occurs. Of course, the great man’s famous words were in reference to Manchester United’s best ever comeback, some fifteen years ago against Bayern Munich – but what he and all other United’s fans witnessed today was a United implosion combined with a superb Leicester City fightback and some refereeing controversy.

United once lost 6-0 to Leicester, way back in 1960/61 season at Filbert Street. Both teams would finish level on points at the season’s conclusion, with Leicester finishing one place higher due to superior goal difference. There is a long way to go until this season reaches its climax, but Louis van Gaal will surely want to review his defensive setup as United were torn apart at times. Here we discuss the talking points from an exciting match and welcome comments from both sets of fans.

Jamie Vardy, United’s capitulation and that penalty decision
Firstly, one must heap praise on Vardy’s performance against United today. He was a menace all afternoon, ran his heart out tirelessly and was involved in every single one of Leicester City’s goals. His cross for the first goal, a header by Ulloa, was only made possible follow Vardy’s excellent cross from United’s left hand side. There was a suggestion that the ball had gone out of play, but the linesman thought otherwise and the goal was awarded to the home side, who began their comeback from two goals down following Robin van Persie’s opener and Angel Di Maria’s sublime chip over the head of Kasper Schmeichel. It demonstrated character and heart, which was summed up by Vardy’s play.

When Ander Herrera scored United’s third goal, it would be fair to say that the away side were well on their way to pick up a second win in a week following United’s 4-0 victory over QPR last Sunday. However, a controversial penalty followed, then Wayne Rooney’s wayward clearance led to a Esteban Cambiasso equaliser, Mata was caught in possession for Leicester to take the lead and Tyler Blackett brought down man of the match Vardy for a clear penalty. United’s capitulation was astonishing and exposed just how weak United are as a defensive unit. There was a famous United comeback in 2001, when Spurs led 3-0 at the break, before United stomped back to a 5-3 victory. This Leicester comeback was up there with that result, given the limited time they had to score four goals.

The result of the match may well have been different had Mark Clattenburg given what appeared to be an obvious foul on Rafael by Vardy. The Leicester forward appeared to look at Rafael and barge into him, whilst ignoring the flight of the ball, in an attempt to win possession. Clattenburg should have blown for a foul then, but instead let play continue. Rafael, who is prone to making rash tackles when feeling aggrieved, thundered up from the turf to chase the advancing Vardy, who was now in United’s box.

The Brazilian brushed the former non-league player, who fell to the ground empathically. Many would argue that the challenge wasn’t anywhere near that bad than the one on Rafael seconds earlier – but Clattenburg felt otherwise and Leicester were awarded a lifeline to get back into the game having just gone down 3-1. David Nugent stepped up and scored the penalty, which lifted the home side and the crowd and was indeed the turning point of the match.

You can’t question Leicester City’s spirit and character to overturn a result that looked done and dusted. You can’t question United’s defensive frailties and inability to see how a lead. But you can question an incorrect decision, which had a signifiant impact on the result of the match.

United’s defensive woes continue
When the news on transfer deadline day was announced that United were going to be signing Falcao, many fans were shocked at the thought of the one of the best strikers in world football lining up in a team that already had an abundance of attacking talent, but lacked defensive steel. How would United lineup? Was the tactic to score more goals than the opposition? The result today summed up a potential result you could possibly have foreseen as the Colombian was standing with Ryan Giggs in Carrington posing for photos. The absolutely ridiculous chip from Angel Di Maria was cancelled out by the Nemanja Vidic shaped hole in the defence.

I still can’t understand the reasoning behind not replacing the experience of Rio Ferdinand, Patrice Evra and Nemanja Vidic – three European Cup winners who have amassed over 150 international caps. Yes, we’ve read in the week, following extracts from Ferdinand’s autobiography, that there was a distinct lack of trust from the players towards David Moyes’ training regime and ability to succeed Sir Alex Ferguson. Whether you agree Ferdinand should have documented it or not is irrelevant; it is clear that Ferdinand and Vidic weren’t impressed with United’s new boss.

Vidic’s decision to leave for Italy would have been a lot harder had someone of Louis van Gaal’s ability been at the helm, but he wasn’t and the Serb decided that his seven years at Old Trafford should come to a close. United’s captain and leader for so long called time on his brilliant career at the club.

Rio Ferdinand was one of the best defenders I’d ever seen at United, but his ageing legs were beginning to show, whilst Patrice Evra obviously didn’t want to play second fiddle to Luke Shaw, a player yet to make a competitive appearance for the club. United look in disarray at the back with the leadership and experience of those three players missing. Jonny Evans can’t be relied on with his injury record, Tyler Blackett has potential but is far from the finished article and needs someone alongside him, whilst it could be argued that Chris Smalling has not got anywhere near the potential many felt he would reach following signing from Fulham four years ago.

Investment was definitely needed in midfield, with Herrara and Blind who will no doubt form a successful partnership in that diamond, whilst Angel Di Maria is a genuine world class player with exceptional dribbling skills and acceleration to beat players. United looked deflated and unimaginative when the Argentina vacated the field to be replaced by Juan Mata, who although is a fine number ten hasn’t benefited from what was surely a Moyes panic buy in January.

With no disrespect intended to the Spaniard, but with United’s current crop of attacking talent, in hindsight the money spent in January would have been better used to invest in a world class defender. We’ve spoken before about the links with Mat Hummels, who would have been an excellent signing following his heroics in the World Cup over the summer – but, the transfer never materialised and United are left without a genuine top class defender – following Vidic’s departure.

Leicester exploited this all afternoon, with Rojo, beaten to the ball far too easily for the first goal and then was caught out high up the pitch for their fourth. Tyler Blackett was good in spells, but should never have been outmuscled by Vardy in the build up to the fifth goal. His inexperience and naivety also played a part in his decision to challenge the same player in the box, which was a 100% stonewall penalty – unlike Leicester’s second goal.

West Ham are up next for United, who will be good spirits following their 3-1 victory over Liverpool this weekend. 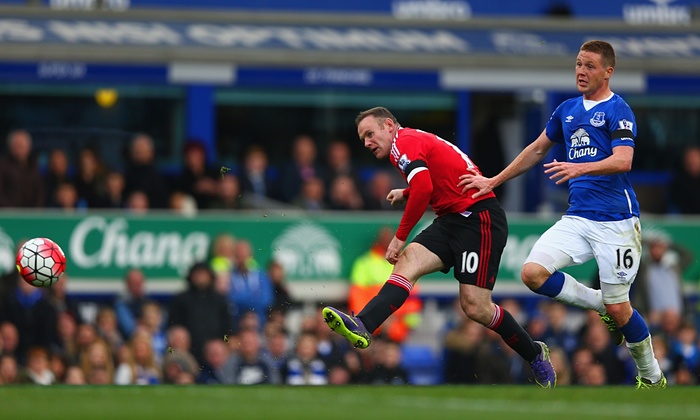 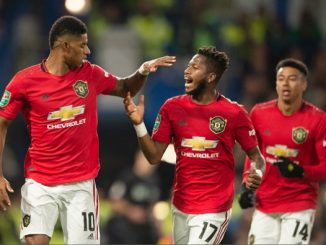