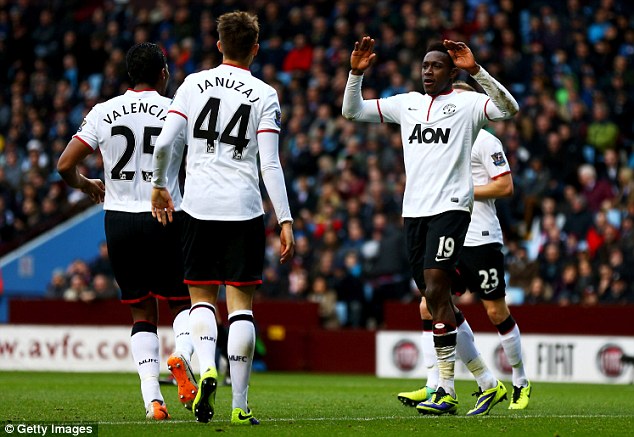 The reverse fixture saw one of United’s best 2013/14 performances – Danny and Adnan were especially good.

Coming off another  unfortunate defeat to local rivals Manchester City, Manchester United take on Aston Villa at Old Trafford on Saturday. Villa Park was the site of one of United’s better team performances in 2013/14, as the Reds ran out 3-0 winners. Since that game, United have lurched from consistently bad performances to awful results, with lots of overlap between the two, of course. To preview the match, we’re got a view from the opposition with Jamie, a Villa fan and NFL blogger at Any Given Sunday Night. You can follow him on Twitter (@JamieCutteridge) here. As always, we welcome feedback in the comments from both sets of fans.

1) How would you sum up Villa’s season so far?

Inconsistent. I’m not sure there’s another team in the league that could go toe-to-toe and beat Chelsea one week, before conceding four to Stoke the week after, and it’s been that kind of season; we’re the only team to have beaten Chelsea, Arsenal and City, we’ve got a point at Anfield but we’ve lost at home to West Ham, Stoke and Palace. It’s pretty frustrating. And by pretty frustrating, I mean really frustrating. And by really frustrating I mean ‘Oh jog on Lambert you daft Scottish idiot’, which I imagine is a feeling I share with United fans.

2) What did you make of Villa’s thumping to Stoke City last weekend?

Dismal, utterly dismal. After two decent wins in a row, that should have been a springboard to secure safety last week, and we were one up after five minutes, that should have been it, or at least 85 minutes of competency and looking like we gave a shit. Instead we got out-footballed by Stoke and 15 minutes of attempting to hit long balls at Grant Holt’s massive head. It was about as bad as it got.

3) Is Paul Lambert the right man to take you forward?

It’s really difficult. I don’t think he is, for every Chelsea game we get a Stoke and a West Ham performance, and he’s never really got any level of consistency since taking over. But the flip side to that is the problem the club has had since O’Neil left of chopping and changing managers – there’s been even less consistency, and as much as Lambert’s tactics are head-scratching at times, there’s the basis of a young, dynamic squad there, but I’m not sure he’s the guy to get the best out of it. That was basically a long-winded ‘I’ve no idea’.

4) Should you have sold Christian Benteke when the offers came in?

Nope, and his recent form is showing why. We still needed him this year and I genuinely think a year of guaranteed first-team football this year was crucial for his development. Plus if he tears it up at the World Cup we’ll sell him for an absolute bucketload this summer. Everyone will be a winner.

5) What have you made of Manchester United and David Moyes?

6) What United players would you get into the villa team and why?

Wayne Rooney has been my favourite English player for years, I love just about everything about him and I’d get his face tattooed on my face if he joined. He’s no Gabby Agbonlahor mind you…

7)  Who is the greatest Villa player of all time?

Probably Paul McGrath, a defender winning player of the year for a team that didn’t win the title is pretty unheard of, and his performances at World Cup 94 were incredibly special. So, thanks!

8) What is the greatest United Villa game of all time?

The first game I remember as a Villa fan, which happened 20 years ago on Thursday: Aston Villa 3-1 United at Wembley. We stopped you guys doing the treble, Big Ron got the trophy that Villa team deserved, Dalian Atkinson wore a silly hat, Graham Fenton appeared from nowhere then disappeared and a referee had the balls to send off a United player against Villa at Wembley. If only Phil Dowd had similar gumption eh?

9) What is your Villa all-time XI?
I’ll have to go from my lifetime, the Premier League era. If we stick to 4-4-2 I’d go: Bosnich, Mellberg, Laursen, McGrath, Wright, Merson, Taylor, Barry, Young (He was brilliant for us, honest), Yorke, Agbonlahor

10) If you were Manchester United manager, what changes would you make?
Nothing for Saturday, I’d do exactly the same. Honestly, I think Moyes needs to trust his instincts a bit more. He hasn’t named the same XI twice in 45ish games. That is utterly ludicrous, you can tell his confidence is shot with stats like that, just because something doesn’t work, don’t give up on it straight away.