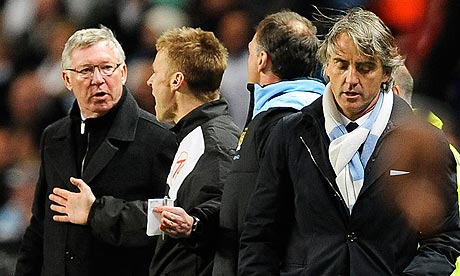 Manchester City manager Roberto Mancini today commented that Manchester United should not be fifteen points clear in the title run in, despite the fact that United have not lost in the league since late November, when the league leaders went down 1-0 away at Norwich. In that time, United have only dropped four points (two draws away at Swansea and Tottenham) whilst City have lost away at Southampton and at Everton, and of course – losing to Manchester United after that last gasp freekick from Robin van Persie. We will have a full preview of the match live on the website in time for the derby.

The Manchester City manager spoke of United’s lead not being a true reflection of the quality on show:

“We don’t deserve to stay 15 points behind. They (Manchester United) have played well and the last time they lost was against Norwich, so they deserve to stay on the top.
But it is not a true table and we now have eight games left, so if we play well and win a lot of these games, maybe we can reduce this gap. This should be our target – because it is a derby, because we want to show we don’t deserve to stay 15 points behind and also because we can reduce the gap. But the title race is finished. We don’t want to go there to lose the game. We want to go there to try to win.”

We have collected a number of betting odds in preparation for the match on Monday: