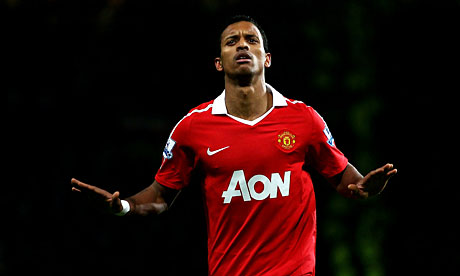 United laboured their way to three points – not for the first time – against Stoke, with Nani – probably not for the last time – the key man, scoring and assisting one. Chicharito returned the favour to his teammate, having being selected to give Wayne Rooney a rest, and although Sir Alex Ferguson will surely not be convinced by the manner in which this result was achieved, he will naturally be delighted he was able to preserve the energy of those he was intending to before the weekend.

The identity of the opposition in the 3rd round of the FA Cup undoubtedly had an impact on Ferguson’s selection, though he was able to select his first choice right hand side with Rafael and Nani returning. Anderson and Carrick were given a rest on the bench with much expected of them against Liverpool, while Wayne Rooney and Rio Ferdinand were given the night off altogether.

Thankfully – in the opening half hour at least – the players who were selected didn’t perform like they had been given the night off. An early, stereotypical, Gibson shot went wide on 5 minutes before Ryan Giggs had a big say on proceedings – first, having an appeal for an handball by Ryan Shawcross turned down, then seeing his shot deflect to Berbatov only to be turned wide, then having a free kick wide before dwelling on another opportunity, all in the space of 5 minutes. In the final wave of those attacks, though, the Potters finally succumbed. Berbatov led the charge, playing the ball wide to Nani, and his ball from the right hand side was sensationally backheeled in at the nearpost by Chicharito.

Stoke’s response was timid until after half time; an early sighter in the second half served as a starter for their main course, a goal – Tuncay was afforded space on the left and he was able to cross unchallenged, to Dean Whitehead, generously given a similar amount of room away from the previously Scrooge-like Smalling and Vidic to head in easily.

Thankfully for United the setback didn’t last long enough that nerves were allowed to truly settle; Nani collected the ball wide right and played into Chicharito. The Mexican played it back to Nani, who, benefitting from a wide run by Rafael to distract a marker, was able to cut onto his left and hit a beauty of a shot into the far corner and seal the result. And “seal the result” is the right phrase, for, with around 30 minutes on the clock, despite the odd flurry, the scoreline was never unduly threatened, and United were able to preserve their energies.

It has often been said this season – and many others, to be quite honest – that it is the importance of the result that is paramount. With the changes tonight and with a chance to make a clear 3 point gap appear, that is true, but what is also true is that United need to start putting sides to the sword more consistently if they are going to be able to truly convince even their own support.