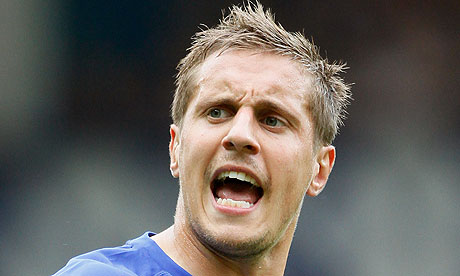 Phil Jagielka. A model professional; someone always in the paper for the right reasons, always pictured doing charity work. A player who has demonstrated to kids everywhere that a player doesn’t need to be a Leo Messi, Cristiano Ronaldo, or some other teenage sensation to succeed in the game. He has worked hard to get his rewards and is rightly respected by most in the game.

However, he has undermined all that hard work in one fell swoop with a quote in this mornings Metro, saying “it should be amusing” when commenting on the level of abuse he expects Wayne Rooney to receive on Merseyside on Saturday.

I’m sure Jagielka, with all he has been throughout his career, didn’t mean the words as they sounded. Regardless; the comments sound like he is condoning vitriol at whatever level even with the benefit of hindsight. This will include angry, drunken threats of physical attacks.

No, it won’t be funny for Rooney if he is subjected to abuse that is escalated even from that he currently endures on each return to Liverpool. Why would it be? Sure, we all know Rooney is his own worst enemy and more than plays his part in the banter, but banter is where it should stop. A hate campaign or a deliberately timed plant story by the Mirror to incite aggression towards United’s spearhead to it’s peak, if Rooney is guilty of the actions the tabloids are accusing him of he will pay his own price. Is it really enough to warrant threats on his safety? When did this become acceptable, when did it become “amusing”??

Was it amusing for David Beckham’s family to see burning effigies of their loved relative dangling from buildings in London after the World Cup in 1998? No.

The media – rightly – react in disgust to those Arsene Wenger chants that happen throughout the country but only get highlighted at Old Trafford. Those chants are vile, disgusting and definitely not amusing. Maybe it’s far fetched to imagine that those people who created the Beckham effigies would actually set light to the players body if they had the opportunity but it’s certainly not unthinkable to envisage a situation where a riled up, inebriated “fan” takes to the pitch and attacks a player.

Wayne Rooney may not have helped himself in this situation but surely his fellow professionals have a duty to help diffuse an inevitably volatile atmosphere instead of encouraging it. It wouldn’t be widely considered “amusing” or even accepted if it were any other player at any other club, after all.

6 Comments on Phil Jagielka – one is most definitely NOT amused