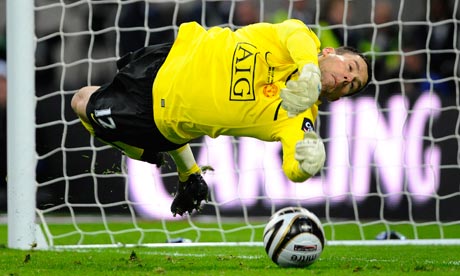 Ben Foster has joined Birmingham City for a fee believe to be in the region of £6million. Foster signed for United back in 2005 for a fee of £1million from Stoke City. He was then loaned out to Watford for two seasons where he got rave reviews for his performances, which helped Watford gain promotion to the Premier League. Sadly for Foster he couldn’t save the Hornets from relegation the following season and returned to United in 2007.

Foster made thirteen appearances for United last season, all but one of them coming in the first half of the campaign. Foster’s inconsistencies could be summed up in the Arsenal match when he saved, quite brilliantly, a shot from Robin Van Persie from point blank range, however he was to blame for Andrei Arashavin’s goal – where he failed to get a strong hand to the shot. There is no doubt Foster is a talented keeper, a great shot stopper, however he had a chance to make Edwin Van Der Sar work for the number 1 shirt earlier in the season, which he failed to do. Mistakes against Manchester City and ultimately Sunderland, when Kenwyne Jones bundled in a header, led to Foster’s downfall.

Birmingham released the following statement on their website earlier today:

Blues have today completed the signing of England international goalkeeper Ben Foster from Manchester United. Foster has joined Blues for an undisclosed fee on a three-year contract. The 27-year-old comes in following Manchester City’s decision to retain the services of Joe Hart next season after his successful loan spell at St. Andrew’s this year. The highly regarded stopper has found his chances limited at Manchester United because of the form of first choice keeper Edwin van der Sar. During the 2009/10 campaign he made just nine Premier League starts. His last outing for the Reds came in their 3-0 win over West Ham United in February. Born in Leamington Spa, Foster began his career with non-league side Racing Club Warwick, before being signed up by Stoke City in 2001. He spent four years with the Potters, during which time he spent several spells out on loan at lower league sides including Wrexham. It was during his time at the Welsh outfit he was spotted by Sir Alex Ferguson who took him to Old Trafford in a £1m deal. The player has four England senior caps to his name, with his last game for the Three Lions coming in a 1-0 defeat to Brazil last November.

Birmingham manager Alex McLeish was also full of praise for his new signing, describing him as a ‘young and hungry’ goalkeeper:

“It looks as if we’ve got another great acquisition with Ben Foster. The goalkeeper is a massive position and we’ve now signed another young hungry goalkeeper who wants to prove himself and live up to his potential. We believe he is of the same kind of standard as Joe Hart. Ben’s situation is similar to Joe’s in that he found himself twiddling his thumbs behind another top keeper in van der Sar. Van der Sar is a world class player and a hard act to follow. I’ve watched Van der Sar since he started at Ajax and he was always destined to play at the top and for as long as he has. Goalkeepers can go on for ever so that one was a losing battle for Ben. Ben is ambitious and wants to play regular football and naturally doesn’t want to play second fiddle. We were looking at it even when Joe was here in the event that we wouldn’t be caught short and to steal a march on other potential suitors. There were another ten or 12 foreign goalkeepers we looked at but didn’t know enough about then and we didn’t want to take a risk. But Dave Watson is a guy I trust and have given responsibility to and he did his homework on Ben. He knows everything about him, although ultimately it’s my decision to choose the players and the goalkeeper With due diligence we’ve done together it and we know that he’s a very capable player. We think he can make a name for himself and it’s up to him to do what Big Joe did.”