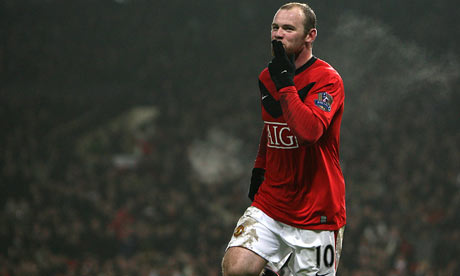 With the doom and gloom of the financial crisis and unethical ownership of Manchester United being the main talking points at the moment, its great to finally receive some good news – Wayne Rooney commits himself to Manchester United long term. There was talk that the Premier League top goal scorer would pack his bags and join Ronaldo in sunny Spain to help fund the Glazer debt, however Rooney has stated he ‘is a United player and is happy here’.

Wayne Rooney has scored nineteen league goals so far in this campaign, five more than his closest challenger Darren Bent. That works out at an astonishing 0.86 goals per game – a truly excellent return. Rooney’s constant running and movement helps the team no end, whilst he is capable of dropping deep and influencing play facing goal also. It is arguable that he is the most complete English forward this country as ever seen.

Most United fans would have breathed a sigh of relief as Rooney quashed rumours that he would be joining former United team mate Gerrard Pique at Barcelona:

“There’s always speculation, and when other big teams are talking about you, it’s nice that you’re talked about. But as I’ve said many times before, I’m a United player and I’m very happy here.”

He also went on to add that he is desperate to win more silverware this season, as United fight for a fourth successive Premier League crown:

“I hope we can win the title again this year. We’ve won the league the last three years and nobody has ever won it four times in a row. We want to create history. The title race is much tighter this year and it’s probably more exciting for the neutrals or fans around the country. But we’re hoping that now we are top we can go on and remain there for the rest of the season.”