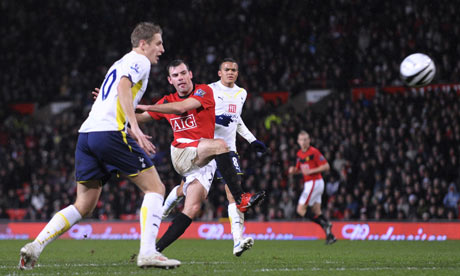 In a repeat of the final from last season there was a familiar result as Manchester United overcame Tottenham Hotspur. Darron Gibson scored two fantastic long range goals to secure a semi final spot for the Red Devils in a tie that was more straightforward than they could ever have hoped for.

After the critics sharpened their knives following last weeks disappointment against Besiktas and with free scoring Tottenham in town Sir Alex Ferguson resisted the opportunity to field a first XI and kept faith with the majority of the team that played against the Turks, though Macheda was named on the bench as Dimitar Berbatov was selected to come back from injury.

The Bulgarian had been named on the bench at Fratton Park but conditions were not favourable so he was in from the start tonight.

Ferguson’s message to his exuberant youths would no doubt have been the usual “trust yourself and enjoy” and with early 25 yard sighters from Anderson and Gibson it was clear they were not about to let their heads drop. Tottenham did attempt to exert pressure by exploiting pace on the wings but their temporary purple patch was well and truly flattened when on the break, Anderson worked well to set up Darron Gibson, who steered home brilliantly from 25 yards.

Gibson was one of those more harshly panned through the last 7 days – and as we blogged earlier, those pretend journo’s at Football365 declared he was destined to not make it at the highest level – but his eye for the spectacular reared it’s head again with 7 minutes to go until the break after a swift, smart move saw him receive the ball. He played it to Welbeck whose return was perfectly weighted, screaming “score”, Gibson duly obliged with a sumptuous curler into the top corner.

In between the two goals Spurs did threaten, but two brilliant Nemanja Vidic blocks and a Richie De Laet intervention kept Tomas Kuszczak’s clean sheet intact. Indeed, another smart move almost brought a third for the holders in first half stoppage time, as Obertan’s delicious slide rule pass just evaded Berbatov, whose ringrust may have been the defining factor in his inability to reach the ball.

The second half was essentially a procession with the token gestures – Spurs made the changes to try and ruffle things up, United in turn actually gained in composure and confidence and looked the more likely to add to their score with a series of clever counter attacks, though neither net was severely troubled.

Bentley’s effort which drew a punch save from United’s Polish stopper and Macheda’s injury time 20 yard drive were the closest either side came to changing the scoreline but the ever improving Anderson and the increasingly impressive De Laet gave very big plusses in that second period for Ferguson to consider.

The last word of course should go on the goalscorer – Gibson’s ability to strike from range has never been in doubt but there was an obvious question mark on his character given the slight on his performance over the last week – and while it is still too early to give a fair indication on how he will develop, his response in not only facing up against top level opposition but also excelling will earn him rave reviews with the Old Trafford backroom staff who already hold him in high regard.