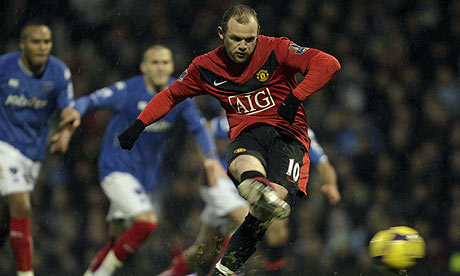 Manchester United closed the gap at the top of the table with a thumping win at Portsmouth full of landmarks, becoming the first team in English football to reach 2000 league wins with a headline grabbing hat-trick from Wayne Rooney, and a man of the match performance from Ryan Giggs that included 2 assists and a brilliant free kick for his 150th United goal, on the eve of his 36th birthday.

Portsmouth have made a habit of making their Fratton Park home an uncomfortable place for United and raised their game again against the Champions to belie their league position. The Red Devils needed stand in keeper Tomas Kuszczak to be at his very best to smother a Dindane chance and then straight away deny Jamie O’Hara’s half volley from 20 yards.

United meanwhile had only a trademark Scholes drive from a corner that flashed over until Antonio Valencia provided the inspiration the visitors needed to get the breakthrough. A flash of pace and a clever interchange with Wayne Rooney led Michael Brown in to commit a foul on the number 10 and add to his growing list of incidents against United over the years.

Rooney comfortably converted and Portsmouth hit back with a couple of free kicks with balls flung into the box.

The linesman then flagged to signal a misdemeanor in the box as Pompey attacked on another of their set pieces – on second view Vidic appeared to be shirt pulling though it will probably be the softest penalty awarded all season, especially when you consider the 4 high profile decisions that haven’t been awarded for United in recent games. Furthermore, the decision to award a penalty for this sort of infringement could set a dangerous precedent. More likely is the probability of it being yet another “one off” decision that goes against United.

Regardless, Boateng took full advantage and levelled it up, and on chances created, it couldn’t be argued that Portsmouth deserved to be level at half time.

Sir Alex took his opportunity at the break to inspire the team to make the penalty decision inconsequential and whatever he said bore instant fruit after the break when Fletcher’s good work found Giggs who exquisitely found Rooney – the English striker pounced for his 10th goal of the season.

Soon after, to the refrain of “Giggs will tear you apart again” the Welshman was skinning Piquionne, and the Pompey forward could do nothing but get suckered in and upend the United legend in the box for yet another penalty. Rooney promptly smashed in the spotkick to complete his third hattrick for the club and all but seal the result.

Portsmouth did attempt to come back into it but the third killed them off and United were counter attacking at will. With 3 minutes left Rooney left a free kick to Giggs, probably as a thanks for the two assists earlier, and the winger accepted the gift by beautifully curling in from 20 yards, marking his birthday with that landmark goal (100 in the Premier League) for the club – just reward for his brilliant second half display.

The action was still not over as Boateng forced another brilliant save from Kuszczak, the Pole tipping onto the bar at full stretch, ensuring the scoreline had a touch of gloss to it. With Rooney returning to top form, Valencia looking increasingly promising and Giggs’ timeless class, United had a three pronged attack that Portsmouth had no defensive answer and hopefully the encouraging display will prove a good platform for the team to build on over the winter.