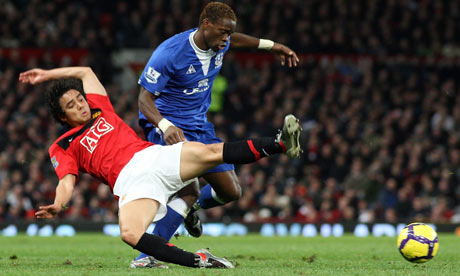 As straightforward as it could get – Manchester United bounced back from their defeat at Stamford Bridge with a routine win and comfortable performance against Everton.

The territorial advantage as well as all of the possession was, unsurprisingly, dictated by the Champions though the visitors did restrict them to just that and not much in the way of goalscoring opportunities – a commendable achievement for a side that have even more injury concerns than United.

Their makeshift formation that saw two centre halves as their central midfield pairing and 2 central midfield players as their wingers was never comfortable but still, difficult to penetrate, and it always seemed as if it would take the wonderful or the bizarre to break down. In Darren Fletcher the wonderful arrived, as he connected on the half volley to blast in a rising half volley off the top of the post.

United were spearheaded by a strike force that were boyhood Evertonians and Michael Owen had chances either side of the break to double the advantage that went begging. The Toffees then had their best spell of the match as Fellaini saw a goal ruled out for offside and Cahill saw a chance quickly smothered by veteran keeper van der Sar.

Their brief revival only served to remind United there was a game to kill off and they promptly did just that when Wayne Rooney miscued a shot that ended at Ryan Giggs’ feet – the Welshman used all his experience to perfect a weighted pass in a crowded penalty area to the feet of Michael Carrick who connected beautifully from 18 yards.

Game over, and the icing of the cake was provided when Antonio Valencia’s latest fine performance was rewarded with a deflected goal – the cherry on the proverbial cake in Sir Alex’s affordable ringing of the changes as Wayne Rooney, Rafael and Michael Carrick were all given rests.

Everton prodigy Jack Rodwell, no doubt inspired by the last fortnight’s tabloid persistence that his future may lie at Old Trafford, tried to salvage something with a couple of late efforts but his efforts were in vain as van der Sar collected another clean sheet.

It was a real team performance with no-one you could clearly say was the outstanding individual, and coming into a time where United usually find their feet in a season, it was probably this that was most pleasing for the home boss.