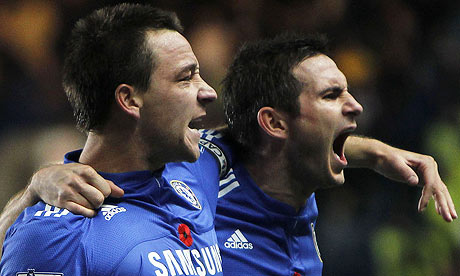 Composed, disciplined and in control – in this clash between Champions and league leaders Manchester United did everything that was asked of them but for the second “Grand Slam” game in a row, were cruelly robbed of at least a probable draw after poor officiating.

Perhaps Sir Alex Ferguson has been reading this website after our considered opinions regarding the shortcomings in the European Cup Final and our last two games against Liverpool as he went for a three man central midfield that included both Fletcher and Anderson.

Any thoughts that such a switch were merely to contain their hosts were quickly disspelled as the Red Devils dominated the opening period, playing the better football and really performing a tactical masterclass, negating Chelsea’s own strengths while attempting to utilise their own. If the linesman had made the right call in the 7th minute Wayne Rooney had a clear 30 yard run on goal, unfortunately the assistant wrongly flagged for offside.

Further controversy was to follow as John Terry clearly fouled Antonio Valencia in the box only for a goal kick to be awarded. Perhaps it was a case of “if it was anywhere else on the field it would have been given” but nonetheless it was a bad call and had echoes of Agger’s foul on Ryan Giggs at Anfield recently.

Valencia then featured again when opting to shoot from 25 yards when O’Shea in space on the right was perhaps the better option, and then on the half hour Ryan Giggs’ clever flick that brought back memories of a Carling Cup goal against the same opponents a few years back just went over.

With minutes left until the half time break a familiar episode broke out – John Terry clashed with Ashley Cole and went down injured, United broke and the referee wrongly stopped play. Two such incidents cost United goals against Chelsea in the Community Shield and Ferguson was out of the dugout, rightly aggrieved.

For all United’s domination Chelsea probably fashioned the clearest opening when Anelka got van der Sar almost blindsided, the Dutch keeper reacting late and reacting brilliantly at full stretch to deny the well travelled Frenchman to ensure the visitors goal remained unpenetrated at the break.

The second half followed a similar pattern to the first with United having all of the meaningful possession of the ball and fashioned early chances in the second half.

After a fairly tentative game challenge-wise Ivanovic then recklessly exploded with a shin high tackle on Giggs. Ivanovic was only booked for a foul that looked even worse than Gary Neville’s against Barnsley that was clearly acknowledged as a straight red, but if the Champions were aggreived at that call, worse was to follow.

United had dominated the game with Fletcher as usual, Carrick as a welcome surprise, and Anderson in particular all flourishing in their midfield roles. Any Chelsea goal was always going to come from a lapse in that midfield discipline or a referee howler, and their winner came from the latter as referee Martin Atkinson incredibly adjudged Ashley Cole running into Fletcher as a foul by the Scot as he span away to launch another United attack.

The freekick was converted by either the shoulder of Blues skipper John Terry or that of Nicolas Anelka. The visitors’ protestations extended after the goal as Drogba dragged down Wes Brown and then in an offside position swung a foot at the ball – goals have been disallowed for this kind of “interference” in the past – resulting in the expected booking for Rooney who Atkinson felt complained out of line. Ferguson had to take a gamble from then on and threw on Owen and Obertan for Giggs and Anderson – the Brazilian was clearly disappointed to be brought off after being the best player on the pitch (regardless of the Sky Sports imcomprehensible decision to give the award to the anonymous Anelka), and the gamble was never really going to pay off either, with the only real chance after that being a screwed Valencia shot that went well wide.

It is a results business and the result shows United are 5 points adrift of Chelsea despite clearly being the match of them – the media witchhunt that has plagued Ferguson through this season following his comments about the fitness of an official seems to have set a worrying trend in that referee’s and their assistants have free reign to give scandalous decisions against the Champions and the manager’s gagging order makes it almost impossible to speak out against the repeated injustice.

As it was, the three terrible decisions in this game – the Valencia penalty appeal, the Ivanovic red card that never was, and the free kick that lead to the goal – may not, by shaping the result, have fashioned an unassailable lead for Chelsea in the league title race, but nonetheless may still prove the tipping balance at the end of the season. The media will no doubt concentrate on the result rather than the desperately poor refereeing but when one club is repeatedly suffering as a consequence of those bad decisions in tandem with the media’s obsession with trying to ensure Ferguson is the one manager who can’t speak about poor refereeing, questions must be asked.