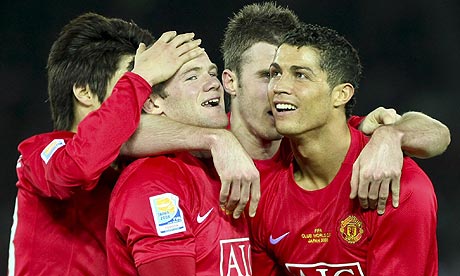 Manchester United became the 2008 World Club Champions after beating Copa Libertadores Champions, Liga de Quito, in the final in Japan – although the sending off of Nemanja Vidic was the only downside.

United totally dominated the game from start to finish with Wayne Rooney giving a masterclass in movement and making so many intelligent runs, the Liga de Quito defense were run ragged. Rooney latched on to a number of superb Michael Carrick passes and tested the Ecuadorian keeper José Francisco Cevallos. Rooney two best chances resulted in two superb saves to stop United’s number 10 from opening the scoring.

The best chance in the early part of the half actually fell to the South American champions who worked a smart freekick from the left hand side and Argentinian play maker Manso swung in a low cross to only see Jairo Campos miss the target. It really was the closest the South American’s came to opening the scoring.

Anderson was dogged in midfield showing why he is can soon be considered an all round midfield with his constant harrying and pursuing of the opposition when they had the ball and his creative thinking when opening up chances for Rooney. His passes and moves very quickly and as soon as he becomes more prolific in front of goal – it will be hard to dislodge him from the midfield – although the night belonged to Wayne Rooney.

Early in the second half United were down to ten men due to a foolish off the ball incident involving Nemanja Vidic. Vidic clashed with Claudio Bieler and whilst both players were on the floor – the Serb swung an elbow in the face of the Argentinian forward – he had to go . The only problem for United now is that he will miss the first leg clash between Manchester United and Inter Milan out in Italy.

Ronaldo continued to raise the crowd, who were overjoyed to see his showboating and skills as he glided across the Yokohama pitch. Carrick was once again showing as to why he can be considered one of the best passers in Europe and was unlucky that he did not get more assists to his name after some sublime through balls.

The goal came on the seventy-third minute when Wayne Rooney curled a superb shot passed the thirty seven year old keeper who could not get near the placed shot. United were well worth the goal and should have won this game by a lot more than the 1-0 margin. It was only right that Wayne Rooney was crowned most valuable player of the tournament.

Gary Neville and Darren Fletcher came on for the last seven minutes but the game was already won and United were crowned Champions of the World in a tournament that has received some criticism over the past week. United came out and did what they had to do and can now look forward to a boxing day clash with Stoke City who will be hoping to avenge a 5-0 thrashing from November.