Dimitar Berbatov was again left out of the Spurs side that traveled to Stamford Bridge today – fueling the speculation even more that the grumpy Bulgarian is on his way out of the North London club. Along with the circus style transfer saga of Cristiano Ronaldo to Real Madrid with the jester, Ramon Calderon, providing extensive comedy material throughout the summer, the Berbatov transfer has driven both set of fans mad. It’s obvious that Berbatov wants a move to Manchester United, it’s obvious that Manchester United want the player (having bid over 20 Million pounds is usually a good sign) and it is obviously clear that Tottenham want to get as much money for their star man as possible – and why not!? We ridiculed Real Madrid for their approaches towards Ronaldo since the Champions League final, especially after Calderon had stated that United should be ‘honoured to be involved in such a historic transfer’ whilst also trying to comically set the transfer fee of the player that he is after – so Tottenham are correct in their stance on the valuation of Berbatov.

The thing is, with players getting more and more power nowadays (and with the head of FIFA not helping with crazy inaccurate comments) it is harder to take a harsh stance and banish the player to the reserves. The introduction of the Webster ruling has also helped those players wanting to make a move away from a club or negotiate a new contract with the club. Reports have suggested that Berbatov could even leave the Premier League for good and sign for Barcelona, something that Spurs would surely favour.

Andy Webster’s transfer wrangle could have an even bigger impact than the Bosmon Ruling.

This blog isn’t about investigating whether or not players should be able to take advantage of a ruling that gives clubs even less power over their players – it’s about whether or not the proposed Dimitar Berbatov deal will actually aid Manchester United’s attacking options this season. So far we have scored two goals in two Premier League matches – hardly scintillating form – however one must remember the amount of goals we’d scored at the same point last season – one! We were in an even worse position in the league having drawn with both Reading and Portsmouth – so I don’t really see the need for panic stations just yet.

Anyone watching United last season would know that the attacking play was based upon extremely good movement from the front four that was backed up by sublime creativity of the centre two. Rooney and Tevez have the capability of dropping deep which as a defender is a nightmare. You do not know whether you must push up or hold your position, which allows the player more space to turn and create havoc. Wayne Rooney has had a torrid time in the press lately, which I would argue is quite harsh. His work rate and movement enabled Cristiano Ronaldo to utilise the space and score a number of those 42 goals. Now not many teams play with a pass and move style similar to United’s in the Premier League – the reason is you need good technical players that can combine intelligence/awareness with exceptional athletic ability.

In Rooney, Tevez, Ronaldo, Giggs, Nani and sometimes Park – United have that, although in order to play this high level pass and move game it needs time to develop and it is no surprise that some of the games so far have been flat at times. Ronaldo didn’t score his first Premier League goal till the end of September, which although came through a mistake by the full back rather than the movement i’m talking about, shows that it can take time to click and I don’t agree with the ‘United need a target man‘ comments I read in most newspapers. Berbatov has much more to his game that simply being someone who can hold the ball up and allow the midfield to push up, but how will his inclusion in the side affect the style of play that we now adopt that was so pivotal in the success of the club last season?

“Fergie i’ve found the perfect target man for you…”

In 2003 Carlos Alberto Parreira left the coaching conference stunned with his prediction that 4-6-0 would become the next big tactical innovation. Five year ago I would have been equally as stunned by the comments of the World Cup Winner who ironically was in charge of a side that is renowned for its creative flair, self expression and extreme hard work. 4-6-0 sounds an extremely negative line up – which you would expect teams visiting Old Trafford to adopt not United. If Parreira is right and 4-6-0 becomes common in our domestic game but more likely in the European game then why do we need to have a target man?

The blogger, Jonathan Wilson, has written a superb book on the evolution of tactics throughout the history of football. It highlights the forward thinking of the Eastern Europeans, which actually relates to this movement section, with the withdrawn forward which brought England to its knees in the 6-3 humiliation at Wembley in 1953. As you may be aware, the English aren’t the most liked nation throughout the world and this opinion doesn’t change when analysing the footballing philosophy. The Peter Crouch and Jermaine Defoe partnership is the latest strikeforce that would have the old fashioned critics drooling at the mouth. ‘Find the big man up front and the little lad will feed off the scraps’ is common amongst the discussions of our local publics houses up and down the country – a view I do not subscribe to.

Football, well good football, is about movement and intelligent players who are able to find space and receive the ball, with the confidence that they keep the ball even when under pressure. A high pressing tempo game is useless when playing against a side that can keep the ball under pressure – a factor that has been found out by the England national team over the years. The movement of the ‘front four’ last year was sublime at times – this wouldn’t have been possible had United adopted a more rigid system that was evident in the season prior to the transfer of Ruud VanNistelrooy to Real Madrid. United looked a much better outfit at the end of the 2005/06 season with Louis Saha partnering Wayne Rooney in attack. The comparison to what followed the next season was immense with United playing a much more fluid and quick brand of football that was non existent in the latter years of VanNistelrooy’s career at United. Don’t get me wrong – I hold fond memories of VanNistelrooy but the evolution of football over the past five years combined with his injuries meant that United could no longer incorporate the Dutch striker in the starting lineup. So where does Seba Veron fit into this? Veron, unfairly, is usually amongst the worst transfer of all time due to the enormous price tag that accompanied his move to Old Trafford. Veron was a world class player who was capable of pure genius, especially in the Champions League but mainly failed to adapt to the high tempo games in the Premier League – most noticeable his lethargic performance against Chelsea when United went down 3-0 at home. Was Veron right for United? Looking back no, of course he wasn’t.

United won the 2003 title, however did so without Veron in the 2-2 draw at Highbury against Arsenal and the 4-0 victory over Liverpool at Old Trafford in the title run in. He did make an anonymous appearance in the 4-3 thriller against Madrid at home – which saw David Beckham putting in a superb performance having coming on to replace Veron in what would be his last Champions League game for United. Depending on what you read Veron was the second choice transfer target for Fergie in the summer of 2001 with United reportedly wanting to controversially recruit the then Arsenal captain Patrick Vieira. For one reason or another the deal didn’t come off and United turned attentions to the Argentinian midfielder who was a key member of the Lazio squad. The signing of Veron was exciting at the time – considering United had also signing Ruud VanNistelrooy for 19Million – and a new five man midfield with Paul Scholes adopting a role just behind the striker. Anyone that saw the early part of the 2001/02 season would remember how the five man midfield, with Scholes looking uncomfortable out of position, didn’t work and Fergie tried to find a balance whereby his existing midfield of Beckham, Keane, Scholes, Giggs and sometimes Butt and Neville could accompany the vision and creativity of Veron. Of course the transfer of Stam to Lazio didn’t help matters, considering United had been linked to Thuram that summer also, with the aging legs of Laurent Blanc coming into replace the Dutchman – but United had more than enough quality to win a fourth successive Premier League title, however were beaten by an unfancied Arsenal side – who were brilliant at times that season.

So will the signing of Berbatov, regardless of the unique gifts the Bulgarian has, jeopardise United’s chances of securing another double? What will happen if Berbatov, Tevez and Rooney are fit to play? Will Fergie try and play all three in the same way Veron was played in an already established midfield? There is no doubt that he is a class act and I do like watching him play but is he really what is needed at Old Trafford? Too many English journalists believe United are ‘crying out’ for a target man in the mold of Berbatov to finish off all of the chances United are creating. I don’t agree with this and generally believe that, like last season, United will start to get their flow back and start to destroy teams with good movement, intelligence and overall effective passing that will leave defenders not knowing who to pick up. We had the same criticism last season – lets hope we finish the same way too. 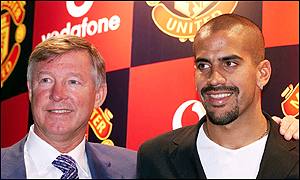 11 Comments on Berba to have the Veron effect? I hope not….