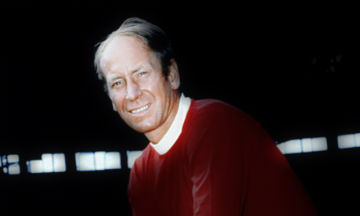 When searching for a physical example of a true legend of the English game, you would be forgiven if you named several players before you got to the man who probably deserves the accolade more than any other – Sir Bobby Charlton.

Playing alongside Best and Law, Charlton was perhaps the most understated of the trio, but perhaps it was his humble attitude towards life and the game that saw his career and achievements dwarf those of his team-mates – for younger readers wanting to make a contemporary comparison, think of the way Paul Scholes and Ryan Giggs conduct themselves, and how, at the twilight of their careers, both have just celebrated another European Cup.

Arguably, Sir Bobby’s achievements, especially considering the trials he had to overcome in life, where even greater than our current legends.

Born into a footballing family in 1937 (brother Jack was a famous footballer and manager, while his uncles where the famous Milburns who starred for Leeds), Bobby was spotted at age 15 by United scout Joe Armstrong – and at 19, he made his debut against Charlton. In that first season he won a league title, lost in the controversial FA Cup final of 57, took part in United’s European Cup run – the first time an English club had ever entered the competition – and even scored a semi final goal at Old Trafford against a Real Madrid side featuring the magnificent Di Stefano – though the goal was ultimately not enough to help United to the final, it did secure a draw.

It was next season, however, that Bobby Charlton’s name was forever to be carved in United history. Urban legend says that Charlton and Dennis Violett changed seats with Tommy Taylor and David Pegg on a plane journey after a game against Red Star in Yugoslavia when the plane made a stop in Munich to refuel – Taylor and Pegg apparently felt they would be safer at the back of the plane. Of course, we all know what happened – the plane crashed, Taylor and Pegg were among those who sadly perished, and Bobby Charlton was one of the survivors.

Few men would have returned to work again, but incredibly, Charlton recovered to make his debut for England just TWO months after the disaster – scoring on his debut against Scotland at Hampden Park, a trademark magnificent volley that catapulted him into the public eye even more so – though even after scoring twice against Portugal in his next game, he could not have expected his international career would lead to him being his country’s all time top scorer, a record that stands today.

After Munich, success on the domestic front was scarce as Matt Busby sought to rebuild his famous “Busby Babes”, but in 1963, a remarkable 5 year spell began which saw Sir Bobby win every major prize, making a vital contribution along the way. In ’63, he starred as United won their first trophy since Munich, the FA Cup – in 1965, joined by a young Northern Irishman by the name of Best, he was a major contributor as the Reds won the league title, before a remarkable 3 year spell.

Charlton had a wonderful affection for his mentor, Busby, and refers to him as “the Old Man” – an affection clearly reciprocated, as the Scot once stated “.. Bobby Charlton never betrayed that (my trust).. it was a privilege to have him play for you”.

Although United finished without a trophy in 1966, Charlton’s form was at his peak as he scored 3 goals in England’s sole successful World Cup campaign, one a memorable rocket against Mexico, and his year was rounded off when he became only the second ever English winner of the Ballon D’or (European Player of the Year to the man on the street). He was runner up in the next two years, years which saw him first claim another league title (his third, and as it transpired, his final), and then, 10 years on from Munich, saw him score two goals as United thrashed Benfica to become the first ever English European Cup winners. That Charlton was club captain at this time was destiny, and the most fitting way to close the door on a decade that began with tragedy and went full circle.

This was the last of the trophies for Sir Bobby, but not the last of his glories – he went on to set appearance and goal scoring records for club and country until his retirement in 1973. His appearance record for England lasted for 3 years after retiring from selection after the ’70 tournament, until World Cup winning captain Bobby Moore overtook him, and his appearance record for Manchester United was only bettered in May 2008 by Ryan Giggs. Charlton remains the only player to have played in four World Cup tournaments for England.

Both of his goals records still stand – at 49 goals for England and 249 for United. While Michael Owen is closing in on the England record, it seems unlikely anyone in the next generation will get near his United record – both records are even more impressive when taking into account Charlton was never an orthodox striker.

Upon leaving United, Bobby joined Preston as player manager – a move which lasted only a year, before a season with his final professional club, Waterford United of Ireland.

Though an immensely likeable personality, Charlton did not always see eye to eye with holy trinity teammates Best or Law – Best famously refused to play in Bobby’s testimonial match after he retired – but in recent years their affinity for one another has been clear to see. Charlton was with Best shortly before he died, and in his autobiography intimated any ill-feeling that existed in the first place was purely to do with what Bobby perceived as George’s waste of talent (a feeling undoubtedly tempered by the stark contrast of that talent that was cruelly stolen from ex-teammate Duncan Edwards).

Bobby Charlton became Sir Bobby in 1994 after being awarded the CBE 20 years earlier – and today, he acts as ambassador for United. He is highly thought of by todays players and this was illustrated by them requesting that he led them up to collect the European Cup in Moscow in 2008 – a request he accepted, but then typically initially refused to accept his honorary medal, preferring instead to leave the limelight to the heroes of the hour. There can be no doubting that just as Ryan Giggs seems to personify today’s United team, Sir Bobby does just that of the Busby Babes – the triumph, tragedy and the ability to rise from that tragedy and restore the glory days to the club are equally as impressive as Giggs’ trophy haul – if not more so.

Indeed, former United team-mate summed it all up when he said of Bobby, “His story is the best in English football”.