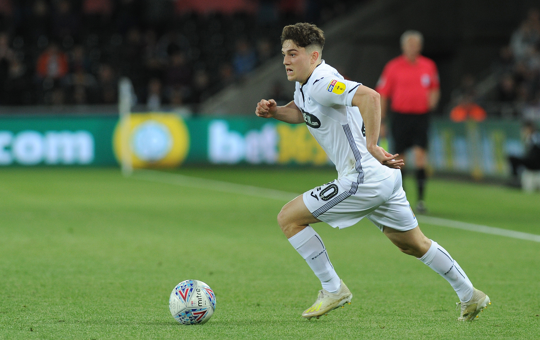 Manchester United have been in the focus of media on Friday. The reason for that was Sky Sports claim that Man United are close to signing Daniel James from Swansea City. That, and the fact that the Devils will host Cardiff City in their final match of the season is what we are focusing on today.

Who Is Daniel James?

Daniel James is a 21-year-old winger from Swansea City. He is Wales international and has been playing in the Championship this season. Most of the time he played on the left wing, with occasional change of position to the right wing or even forward line. However, left wing is his natural habitat.

Why Is He Important?

Dan James is important because he had a breakout campaign at Swansea this season. Swans finished 10th in the league following the relegation from Premier League last May and this season has been much more positive than previous ones. The reason for that are more and more interesting, talented youngsters stepping up in the squad and James was one of them. James had five goals and eight assists in all competitions this season in 38 appearances and his performance against Brentford in FA Cup was a particular highlight.

What Are Sky Sports Saying?

Sky Sports claim that Man United are close to signing James from Swansea for a transfer fee of 15 million pounds. One of the important things to note here is that James was about to sign for Leeds United on the last day of January for 8.5 million pounds, but Swansea pulled out of the deal at the lost moment. The other important thing is that Dan James will be entering his last year of contract this summer – he has a contract with Swansea until June 2020 – and thus 15 million pounds could a bit less than what his transfer fee would actually be.

How Would He Fit At Man United?

And there is the most important question. This is what is always the toughest part of the equation and things do not look rosy for either side here. While Man United would want to get young British talent to bolster their squad, it is a big question of how much would James improve the Devils. He mostly plays on the left wing and the right wing is more important to fix in the summer. Also, James’ incredible speed is what made him stand out, but in general, he is more of a player that would be a decent squad option, a rotational player that could change things when coming on as a substitute.

Below you can see his radar and shotmap from Statsbomb, highlighting his season at Swansea in a different manner.

What we can learn from this is that he is far from being a finished product, but he is not also THAT talented to be a starting winger at Man United. He is making a decent number of shots and a great chunk of them comes from the box, but mostly from wide areas. He needs to be able to get into better positions, something we could say about Anthony Martial as well. Also, James is not a hugely creative winger – he does not dribble much, nor he makes a lot of chances, though the latter part could improve when surrounded with better teammates.

He probably also needs to have his shooting locations adjusted about 4-6m right before he scores buckets of goals.

(Third time is a charm?) pic.twitter.com/NWIGAujJ4s