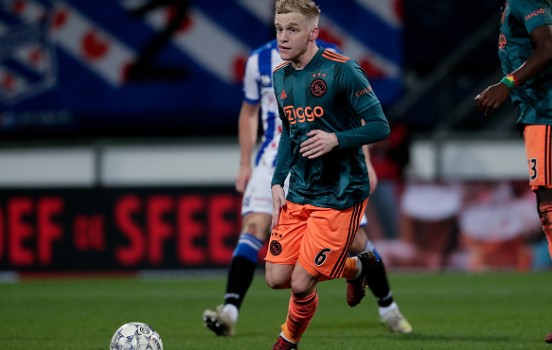 Manchester United are reportedly getting closer and closer to signing Donny van de Beek from Ajax. Reports from all around Europe started swirling today even more so than before, when the Dutch midfielder was just occasionally mentioned in this conversation. Now it seems like Man United have started doing their work on signing the Ajax player and some are even reporting the Devils might get him for around 40 million euros.

With all of that in mind, we will assume, for the sake of this article, that Manchester United are going to sign Van de Beek. He is going to leave Ajax this summer for sure, it was even said from the inside of the Dutch giants and Man United are far from every club that was at some point interested in him. Therefore, we are getting close to confirming the deal. Here is what you need to know about Van de Beek.

Who Is Donny Van De Beek?

Donny van de Beek is a 23-year-old midfielder from the Netherlands. He is still Ajax player and we had the chance to get to know him more closely in the spring of 2019, when Ajax were on that incredible run in the Champions League. Van de Beek played a huge part in Amsterdam club’s incredible success, when Ajax were just seconds away from reaching the final against Liverpool. In the end, they failed to Tottenham, but Van de Beek’s performances that season were so good even Real Madrid were closely following the player.

He stayed at Ajax for another year and whilst that season was not as great as the previous one, it was never going to be, simply because standards of 2018-19 were too high.

What Can He Offer?

Donny van de Beek is a player who is very good in adapting to different systems and at Ajax, he played at a very fluid system of a 4-3-3 formation. At Man United there will be variations between 4-2-3-1, 4-3-3 and other systems and in all of those, Van de Beek can play really well. With Ole Gunnar Solskjaer trying to have four or five attacking players who can often interchange their positions on the pitch, Van de Beek is another one who fits that bill.

He is positionally versatile and at Ajax he even often played in a 3-4-3 formation, which is another plus. He is very intelligent both on and off the ball. Van de Beek is good in possession, keeping it, but is not someone who will try to many risky passes. And that is okay – Man United already have Bruno Fernandes and Paul Pogba to do that.

Van de Beek is also known for his movement and positional awareness. He can roam all around the pitch really well and his stamina allows him to do that without much trouble. That is good when coming to English football – he is used to working hard on the pitch, but his technical qualities are also there. Van de Beek is not a player who can be expected to play as a sole defensive midfielder, as you would have it in a 4-3-3 and he is more of a “free number eight”, a box-to-box player who can be incisive on the ball as well.

It seems so, yes. Considering Man United paid 50 million euros for Fred, this is a great price, but then again, even in this coronavirus crisis, this does not feel like a going overboard to get Van de Beek. For a player who is 23 and on the up, who can offer plenty of things Man United need in the centre of the park – versatility, intelligence, work-ethic, pure quality – this is definitely a good price for him.