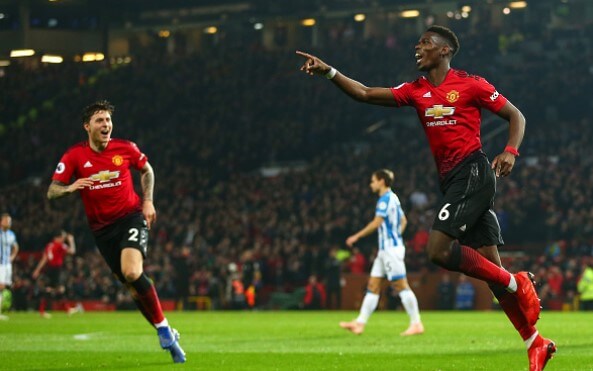 Manchester United have finished their 2018 in a triumphant style. They beat Bournemouth 4-1 on the penultimate day of the year, as they get closer to Arsenal in the standings. This was third consecutive win for both Man United and Ole Gunnar Solskjaer. There still has not been a clean sheet since the Norwegian’s arrival, but the fans will not mind too much – the team has scored 12 goals in those three matches.

Rashford and Pogba had incredible displays, while everything else around them worked quite well too, apart from Eric Bailly’s sending off after 81 minutes. Nevertheless, let’s see some more interesting facts about the game.

It was another man of the match performance from Paul Pogba. Third match since Jose Mourinho is gone and it is third straight match for Pogba to shine on the pitch. Remember when he had three stellar performances in a row like he has now? It might be down to Mourinho to some extent, but it also must be down to Pogba as well.

The Frenchman has been exceptional in these three matches, as he again scored twice. He opened the scoring and then doubled the lead, before adding an assist to his name. He had also created three chances throughout, being a great attacking force. His tally since Mourinho is gone now reads four goals and three assists – a hand in goal every 38 and a half minutes. That is some change.

Quite often, we talk about expected goals. And today you will be happy we do that again, because Man United have been doing some great things in that regard against Bournemouth. Simply said – they were creating high quality chances. Look at the four goals United have scored – both Pogba’s goals came from inside of the six-yard box, while Rashford’s did the same himself. Only Lukaku’s goal from a bit further out, but not too far, as the Belgian scored from some 12 yards.

And each of those chances are rated highly in xG system and United scored all of them. In fact, United had just 11 shots in this match. Just 11, because when you compare that to the seven Bournemouth had, it does not sound as much bigger number. But United created 3.42 expected goals, with the average shot being worth incredible 0.30 xG! That is a huge number that indicates just how good United’s chances were – the players were getting into right positions and scoring from close range. That is a more sustainable way to scoring goals for fun.

Matic And Herrera Controlling From Deep

And they managed that against a team that tried to counter that with a 3-5-2 formation, but even the trio of central midfielders combined far less time on the ball than Matic and Herrera themselves did.