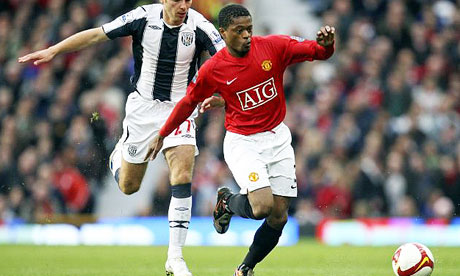 After four away games in a row (all competitions), United return to Old Trafford for the first time in nearly a month. West Brom are the visitors after an international break that seemed to last forever. Incredibly should West Brom win, they will go above United…let’s not even consider that…

Roberto Di Matteo makes his first trip to Old Trafford as a manager. His side have had an excellent start to the season as they sit in 6th place level on points with Arsenal and Tottenham – only goal difference keeps them out of the top four. Before the international break they were on a very tidy run of form. In their last five games in all competitions they won three and drew two. This included knocking Man City out of the Carling Cup, a respectable draw with Spurs and a stunning away win at Arsenal.

I’ve selected three players to look out for: Gabriel Tamas, Graham Dorrans and Peter Odemwingie. Tamas, a centre back, joined permanently in the summer after a positive loan spell in which he helped the club achieve promotion back to the Premier League. As a youngster he captained the Romanian Under 21 team but never truly fulfilled the potential many believed he had. He’s only 26 but West Brom is his 9th club already however his no nonsense attitude and his ability to play a ball out of defence suggest that he’s suited to English football and that he may settle here.

Graham Dorrans is a Scottish international with a growing reputation as a goal scoring midfielder. He joined from Livingston in 2008 and since then has averaged better than a goal every three games. His all round ability has seen him linked with some of the league’s elite clubs but only West Ham publicly bid for him in the summer. Speculation of a transfer ended as he signed a new long-term contract with the Baggies. He’ll try to break up United attacks and turn them into swift counter attacks – West Brom unlike some newly promoted teams actually try to play good football. Last time they were promoted this was their downfall as they didn’t have good enough players to pull it off but this time they appear to be better and stronger.

Finally, Peter Odemwingie made a surprise switch to West Brom from Lokomotiv Moscow whom he had joined for $14million in 2007. Never prolific (Dorrans has a better goals to games ratio), Odemwingie does posses pace and he excites. He has made an excellent start at West Brom with 3 goals in 5 games. The fans have taken to him after Lokomotiv fans celebrated him leaving the club with a racist banner. He will try and get behind our back four and will drift wide as he looks to expose any lack of pace in the United defence.

West Brom most recently visited Old Trafford in October 2008, when they were convincingly thumped 4-0…goals from Berbatov, Nani, Ronaldo and Rooney. Don’t necessarily expect the same kind of result or emphatic performance tomorrow, West Brom are in form and confident. With Bursaspor at home on Wednesday there’s a possibility of some squad rotation but I feel that United will go into this game with a strong team. Rio and Vidic will continue together and I think they’ll be flanked by Rafael and Evra – neither of whom were involved on international duty. In the midfield, Nani will be buoyed after two strong performances for Portugal whilst Anderson’s impressive form since his return should be enough to keep him in the side. Fletcher is a machine and has to play, Scholes will be fresh from a nice break. Ryan Giggs may push for a start if he can prove his fitness.

I understand that most of the attention will be on who plays up front for United. Wayne Rooney has been the subject of the usual international break press – expect him to be recalled to the side and fully committed – this game may just suit him. Berbatov, now retired from international football will be refreshed and almost certainly will start. Should Rooney not be right to start, then Owen will probably get the nod ahead of Macheda.

A lot of the attention from Reds may well be on the bench though. Owen Hargreaves could return to Old Trafford as a match-playing player for the first time since 17th September 2008 – a 0-0 draw with Villarreal. Everyone hopes this latest comeback is for real and that somehow with lots of luck we will see some curly hair bouncing around the pitch again soon.

United have some affiliations and mutual respect for West Brom. It was from them that we signed Captain Marvel – Bryan Robson – who went on to be a legend for United. We loaned them Kieran Richardson in 2005 and he helped them to avoid relegation that year. Most poignantly, they were the opposition for the first home game after the death of George Best – the respect of the away supporters that day in celebrating and remembering a true great of the game is something that United fans are grateful for.

As good as West Brom have been at the start of this season, I think United will be hungry to put some bad performances to bed. I predict a 3-0 win for the Reds.