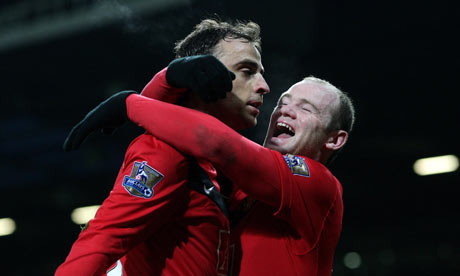 It threatened to be a long afternoon and Burnley threatened to upset the applecart for long periods of this Premier League game, but Manchester United turned up the pressure in the second half to record a comfortable 3 goal victory against their local opponents, exacting some revenge for their defeat in the return fixture in August.

Edwin van der Sar returned from his injury and compassionate leave to break a post war record for the oldest player to turn out for the club; while elsewhere in the team selection eyebrows were raised as Nani started a league game for the first time since October.

The hosts created a number of chances in the opening period with overhead kicks from Rooney and Nani the most elaborate and a 20 yard Rooney curler the closest – the Red Devils took a while to realise that, as usual, Antonio Valencia was going to be their most penetrative force. The Ecuadorian was once again in thrilling form and he needed to be as both Michael Carrick and Paul Scholes were, to be kind, little more than functional – Nani was understandably rusty but was nonetheless giving the visitors an unwelcome headache.

No goals in the first half; and despite the statistics showing that the Champions were dominating, the best chance of that opening 45 minutes was easily Burnley’s early opportunity created by Chris Eagles and Dave Nugent, and screwed wide when the chance presented itself favourably for Steven Fletcher.

United were seemingly in need of some inspiration – Evra’s determination to somehow fashion a chance for Rooney who then somehow screwed over didn’t exactly spark the team into life, while Dimitar Berbatov provided the supporters with something of a summary of his Old Trafford career to date when he controlled a Valencia pass with indescribable brilliance, and then stabbed wide as the goal gaped with indescribable frustration.

The spark that United needed came in the form of another Burnley opportunity; fashioned again from ex-Red Chris Eagles who was enjoying the freedom that new Clarets boss Brian Laws had given him, and finished horribly by Dave Nugent.

United promptly went up the other end and flashed a shot wide through Rooney – who then turned provider. He weighted a through ball quite brilliantly; Berbatov looked as if he had been forced too wide, but he finished with more than just a degree of compsure on his left to break the deadlock (with the hint of a deflection), to the tangible relief of the Old Trafford faithful. The goal ushered in a frenetic few minutes – United replaced the pedestrian Carrick with Anderson, but Burnley almost levelled through Eagles whose finish did not quite match the brilliance of his mazy run.

That glimmer of hope was almost immediately extingushed – as United pushed forward again, Anderson showed he could match Berbatov in the extravagance stakes. The Brazilian’s trick was incredible and caught the entire Burnley defence cold. Berbatov, though, was unable to benefit as his short was smartly saved by Jensen – however, the respite was short lived, as Rooney composed himself on the rebound and comfortably finished to seal the points with just over twenty minutes on the clock.

The game entered a period of dullness despite the exchange of Berbatov and Rooney for Owen and Diouf – there were brief moments of creation as Anderson and, in particular, Valencia, would not let the visiting defence rest. Chris Eagles came off to a warm reception from the entire crowd but ironically a minute after Burnley had their closest chance, as Thompson hit the post with a header.

Mame Diouf actually had a hat-trick of chances in the closing stages – the first, again set up by Anderson and Valencia, suggested that perhaps heading was not his forte. The second was converted to add gloss to the final result, Valencia’s stunning through ball was bravely – and intelligently – headed in by the Senegalese forward under pressure from the Burnley keeper.

The forward was once again presented with an opportunity provided from Valencia and Anderson but he shot wide after a clever shift of feet from 18 yards. van der Sar was tested from a freekick in the dying stages but made a marvellous stop.

One would suggest the scoreline was harsh on Burnley given that they more than played their part in the contest but United did fashion far more opportunities, even if the visitors had a couple of clear cut chances. And on a day when United’s title rivals Chelsea destroyed Sunderland, they ultimately only ended up 2 goals better off – it’s easy to forget now that United are fielding 4 recognisable defenders that 3 of those are still not first choice, and that Ferguson still seems unclear over who he prefers in midfield, even if Anderson’s recent form seems to be screaming out for a regular run in the first team.

The man of the match by a considerable distance was Antonio Valencia – it is no exaggeration to say that had his team-mates had their shooting boots on from the chances he created, they could have doubled the scoreline, but for now at least, a comfortable victory is probably very welcome news for Sir Alex.