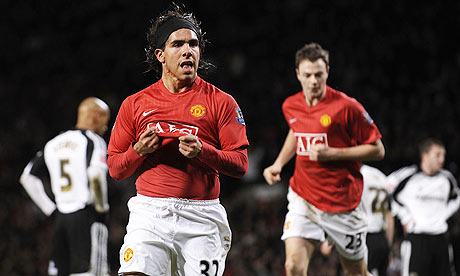 Sir Alex Ferguson reached his fifth League Cup Final with Manchester United after his side overcame a first leg deficit to go through to Wembley 4-3 on aggregate.

A cracker from Nani from over 25 yards out gave United the lead and John O’Shea doubled the advantage from a Welbeck pass. Carlos Tevez headed in a magnificent cross from the impressive Rafael before half time.

Substitute and ex-United trainee Giles Barnes converted a penalty and a super free kick to pull Derby back in it either side of a spot kick from another sub, Cristiano Ronaldo.

The Rams gave 100% effort but were outclassed in a dominating first half performance by the European Champions, and were never likely to stay in the tie after Tevez’s goal.

Injuries to Rafael, seemingly Gary Neville, as well as Jonny Evans and Anderson too may yet prove to be costly to Sir Alex, though he will be delighted to progress to the final, hoping to win it for the third time as United manager.