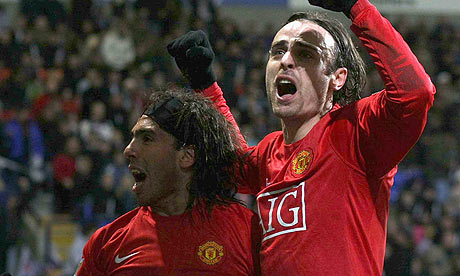 Manchester United record signing Dimitar Berbatov scored a crucial, dramatic goal to clinch a vital win at the Reebok Stadium to take the champions to the top of the league for the first time this season.

It looked as if Bolton would snatch a point after a plucky first half display was matched with a resolute second performance but the Bulgarian’s header in the 89th minute was enough to take all three points.

A confident start for the visitors in possession was answered by an attacking spell by the home team, but United turned up the pressure before half time, almost scoring through a free kick from Ronaldo and a stinging drive from Anderson, before Ronaldo saw his close range header saved by Jaaskaleinen.

United began to open up Bolton in the second half, with Carrick‘s long balls to Ronaldo the most penetrative that the Champions had offered – after a quiet opening, Ronaldo really began to burst into life and on three occasions his crosses into space were wasted by his teammates.

Changes were made as Scholes and Giggs came on, but Bolton responded with defensive substitutions. It appeared as though there would be no goals, but Giggs wriggled through and played a ball to Tevez. Tevez found space on the right and crossed for Berbatov, who headed in to the centre of the goal.

The result was the trademark of United’s title winning campaigns of the past and also marked a Premier League record for consecutive clean sheets.