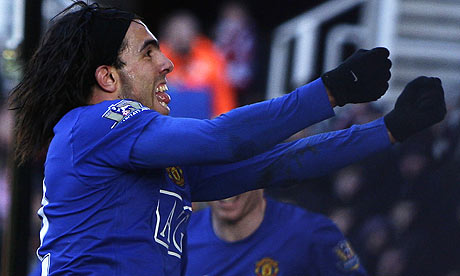 The diminutive Argentinian added the Brittania Stadium to the ever increasing list of venues where he has broken the hearts of the host clubs supporters, at the same time giving a very timely reminder to the powers that be at Old Trafford of his priceless value in these situations.

Tevez’s goal rescued the Red Devils as Stoke stuck to a game plan that had served them so well – Thomas Sorensen made good saves to deny Rooney, Tevez and Scholes but the Potters were hardly under the cosh until Andrew Wilkinson concluded his personal battle with Ronaldo 20 minutes early – being sent off for a second yellow.

Sir Alex Ferguson threw Berbatov on for O’Shea and the lanky Bulgarian was largely anonymous until he picked up on a Neville pass, mis hit a shot, and Carlos Tevez as there to hammer home the winner.

Ronaldo almost scored a free kick but a second would have been harsh on Stoke even if United did just enough to deserve the win.

In terms of immediate result Tevez’s goal means just 3 points but in terms of timing and momentum the true value of the strike may (just as it did last season) only become apparent in a month or so.