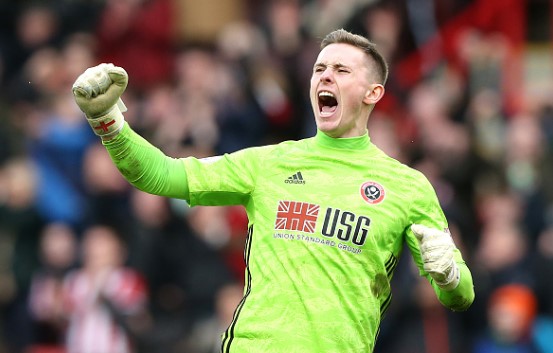 It is a big day on Sunday. Manchester United will be playing in another FA Cup semifinal. It will be their fourth match against Chelsea this season, in a third different competition. All three previous matches – two in the Premier League and one in the League Cup – have been won by Ole Gunnar Solskjaer’s side. Now, going for their poker of wins over Frank Lampard, Man United will have to show their best game in front of empty stands of the Wembley Stadium.

But before that match, we should also focus on other things. Here are the main topics for today.

There has been a lot of talk about Dean Henderson and his future at Manchester United. English goalkeeper has been doing excellently in his second season on loan at Sheffield United and as the season progressed, there were more and more voices about what could happen with the goalkeeper next season. David De Gea’s poor form at one point made many suggest that Man United are thinking about giving the chance to Henderson next season and even offloading De Gea.

Those claims are probably far from truth, simply because it would be too drastic a change for a player United have never really tested at Old Trafford. Now Chris Wilder, Sheffield United manager, spoke about the player and what could happen with his situation. He said that both the player and Man United know that the Blades want to keep him on loan for another year. Sheffield United apparently started talking to the player and the Devils. Those two sides will decide what will happen and who knows, maybe another year at Bramall Lane could in the end be the best thing for the player.

Man United Still Trying To Get Rid Of Sanchez

New details are coming out of Italy about the potential deal between Man United and Inter Milan in regards to Alexis Sanchez. The Chilean is still on loan at Giuseppe Meazza but for him to stay there beyond this season, there has to be found an agreement and right now it looks like there is a lot of wishful thinking on behalf of Inter.

According to Libero, Man United are now okay with getting 20 million euros for Sanchez, but Inter are ready to offer only 10 million euros. The reason for that could be player’s huge wages and Inter also want to get those down as much as possible. Nerrazzuri want to reduce them to 7.5 million euros per year. It looks like all sides are still far from agreeing terms…

We all know Man United look like a different team since Bruno Fernandes arrived from Sporting Lisbon, but the numbers United have been putting are even better when put into perspective. Since Fernandes joined Man United, all teams played 12 matches, but only the Devils are undefeated. Burnley and Wolves are the only other sides with two or less losses in that timeframe and only Man City have scored more goals than United, outscoring them by one goal.

United have won the most points, have the best goal difference and joint-best defensive record. Not bad… Not bad at all.