Author: Solskjaer Has won it!

It was a glimpse of the past, and quite possibly a glimpse of the future as Manchester United comfortably beat Burnley 2-0 at Turf Moor on Sunday afternoon thanks to goals from Anthony Martial and Wayne Rooney.

The gaffer had made eight changes from the team that started against Anderlecht on Thursday with Martial and Rooney both coming in. With Ibrahimovic injured for the season, Martial got the nod to lead the lines as Rooney tucked in behind him off the left flank.

United were in complete control from the start and should’ve opened the scoring a few minutes in when Rooney found himself in space inside the six yard box. Ander Herrera toe-poked the ball to the captain and only a Ben Mee block that took the pace off the ball stopped Rooney from netting his 251st goal for the club as Heaton collected the shot.

A few minutes later Heaton was tested again, this time from a Fellaini header after a corner was swung in from the right. Unmarked in the box, the Belgian rose highest but his finish lacked a bit of power and former United keeper Heaton saved again.

Burnley were on the back foot from the start but after a rare moment of pressure from the hosts United broke the deadlock. A Burnley cross from the left-hand side was cleared from the box and Martial had dropped in to pick up the loose ball. After getting past Joey Barton, United stormed into a counter attack with four men against two defenders.

Martial travelled 50 yards with the ball before releasing to Herrera who had made a storming run down the right. On his first touch the Spaniard played the ball back to Martial, who composed himself with a touch and slotted home from inside the box.

Burnley clearly had a tactic to try break down the United defence by knocking the ball long and picking up the loose balls, however good work from Eric Bailly and Daley Blind in the heart of the defence, as well as Fellaini in front of them, left De Gea untested.

United doubled their lead five minutes before the break as Pogba won the ball back on the edge of Burnley’s area. The Frenchman found compatriot Martial who had a shot blocked by Heaton, and on the rebound Rooney emerged to poke the ball into the back of the net via Michael Keane’s legs.

The hosts’ best chance in the first half came just after United’s second as they looked for an instant reply. Andre Gray managed to turn inside the box, only to see Bailly block his shot.

Controlling the second half

In the second half, United continued were they left off in the first by controlling possession and getting the better chances. After playing extra time on Thursday, it was evident some legs were tired, amongst others Pogba’s, but the midfielder got a decent shot away from 30 yards which Heaton did well to push wide.

Despite multiple set pieces and long balls knocked into the box, Burnley never really managed to get a proper sniff of goal and in fact it was United that came closest in the second half as well.

After replacing Lingard, Rashford stormed through and tried a quick shot from the corner of the box with Heaton off his line. The teenager tried to curl his low shot in by the near post, only to see Heaton get a hand to it and fist it wide.

Towards the end of the game Pogba came close again. After breaking Burnley’s possession high up the pitch, United were three-on-three. Rashford and Mkhitaryan both tried to find an angle for a pass from Pogba, but the Frenchman decided to try his luck from 20 yards. Unfortunately for United the ball flew just wide of the post.

By United’s standards this season the first half was very promising. Clinical in front of goal and hitting Burnley on the break for the first goal was déjà vu to both last week’s opener against Chelsea and to the past. Rashford and Martial both scoring fantastic goals on the break in the space of a week might have been a preview of what’s coming the next decade. What’s certain is that it has added a new level of threat again to the United attack.

The only worry for United on the day was the fact that Pogba had to be subbed just before the final whistle, possibly because of cramps in his legs, while Bailly seemed to struggle after playing nine games in a row.

The win saw United’s unbeaten run in the league stretch to 23 games, while the top four battle is even tighter as Liverpool lost at home to Crystal Palace. United are now three points behind Liverpool in third with one game in hand. 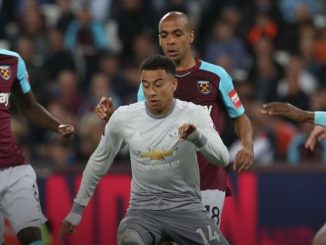