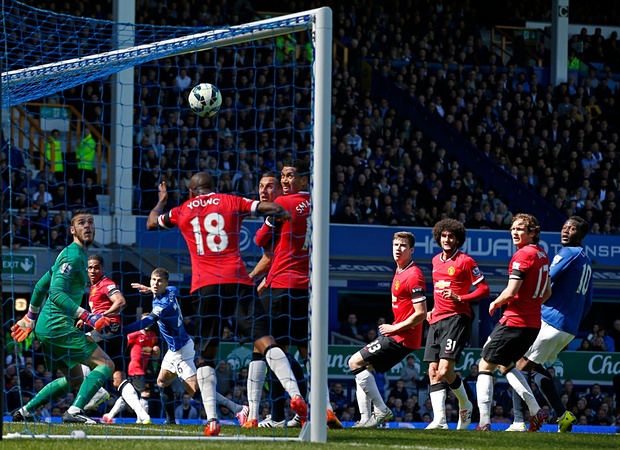 Manchester United were thumped 3-0 away at Everton last season

The International break is over! The Premier League is back! Also, Manchester United are looking to bounce back from the 3-0 defeat to Arsenal two weeks ago. The club travel to Goodison Park today to take on Everton – who come into game following a 1-1 draw with Liverpool. The home side are in decent form following a 3-2 comeback against WBA at the end of September and will be boosted by the performance of Ross Barkley against Estonia and Lithuania.

United went down 3-0 last season in a deserved victory for the home side following a impressive performance from James McCarthy. The season before saw David Moyes take charge of his last game for the club, however – United went into the fixture last April in decent form having beaten Tottenham, Aston Villa and Liverpool before narrowly losing out to Chelsea. Time has flown in this fixture – with twenty years having past since United went down 1-0 in the 1995 FA Cup Final and thirty years since Norman Whiteside bent one past Neville Southall.

We have a great view from the opposition for you today, from Shaun Murphy a season ticket holder at Goodison Park. We discussed former red Andrei Kanchelskis, the form of Romelu Lukaku and just how good Ross Barkley can be. You can follow Shaun on Twitter @shaunmurphy316

1) Happy with progress so far this season with Everton? Where can you finish?

I would say I am definitely pleased with the progress we have made considering the poor start we made last year. One defeat so far and although we have drawn 4, we have tighten up at the back which is pleasing considering we have been forced to bed in the youngsters Galloway and Browning. Heart says top 4 is within our grasp but head tells me if we finish in the top 6 it will be considered a solid season.

2) What have you made of Ross Barkley’s season so far and will he be at Goodison next year?

He’s been fantastic for club and country. We all know he has so much ability and has something special about him, but now he has really started to mature as a player and is working hard on his decision making. This time last season he would try and beat 3 players inside our own half and lose the ball. Now he knows he can still take players on but must also consider what part of the pitch he is in. The fact he has now started to add goals to his game makes him so much more of a threat. It would take a gargantuan amount to take him away and I believe he will be at Everton for at least another two seasons.

3) Romelu Lukaku has picked up from last season. Why did he struggle and how many goals can he get this season?

He did still score 15 goals (10 in the league) and this is that was the third season in a row he has reached double figures. The size of our squad did not help us last year with Big Rom having to play in the Europa League week in week out as well as all of our league games (Kone was still injured). I also think his agent was in his ear which might have affected his form but this season he looks refreshed and is a handful for any defender in the league. I would be disappointed if he doesn’t get 15 league goals.

4) What did you make of Brendan Rodgers’ sacking and what impact will Kloop make at your city rivals?

Rodgers downfall was his signings, as the large majority were pretty poor if I’m honest (besides Coutinho & Sturridge) Borini, Allen, Balotelli, Markovic……the list goes on. He has the right footballing philosophy but was unable to impose these ideas on the players he had at his disposal. They should have axed him in the summer as the new man coming in is stuck with the squad he inherits until January and then anyone he is interested in will be able to add another £5 million to their price tag. As for Kloop, he is a world class manager who will bring a new spark to Liverpool but I feel he has a massive task on his hands turning them back into a club that will start challenge for trophies again.

5) What have you made of United so far this season and can van Gaal make a title charge?

I think United have done well so far however I do believe they are still 2 or 3 signings off a title challenging team. He has spent big again (£100 million this summer) and really needs to deliver something to justify this investment. They need another striker as there is huge pressure on Rooney and Martial to get goals whilst I also think they are susceptible at the back. I believe they will be there or there abouts come the end of the season, but the title is just outside of their grasp.

6) Anthony Martial has hit the ground running so far. Is it he your fear the most? How do you think his partnership with Wayne Rooney can flourish?

Cracking start to his career at united. This young man has a real cool head in front of goal and give him half a chance he will punish you. He does relieve the pressure off Rooney and I hope he lives up to his price tag. As for Rooney, he will kick on but at the moment I think he is happy with Martial taking the headlines.

7) How important was it to keep John Stones? Who are your top three English centre halves?

It was a real statement of intent from the club. You can’t blame him for wanted to go (he would have triple his bank balance) but we totally did the right thing by turning it down and highlighting the importance of him as a player and a personality at the club. He has been a perfect role model since this debacle and his form has excelled (until he got injured). Him and Jags should be the starting pair for England with either Cahill or Smalling as back up.

8) What is your most memorable Everton United fixture and why?

Has to be the 1995 FA Cup final as my favourite due to it being the last time we lifted some silverware. However the epic 4 all draw in 2012 and the 3 all in 2010 bring back fond memories despite Everton not winning either of them.

9) Andrei Kanchelskis was loved at United. How would you sum up his time at Everton and how does he compare to the calibre of Everton players during the 90s?

He joined us during a time when we struggled in the league and was head and shoulders above the team we had (no offense to Mark Pembridge or Scottie Gemmil). He was so direct and his pace was lethal. Sadly he did have a slight problem with the bookies and rumours are he used to wager £10k on himself to be first goal scorer.

10) What is your all time Everton Xi? 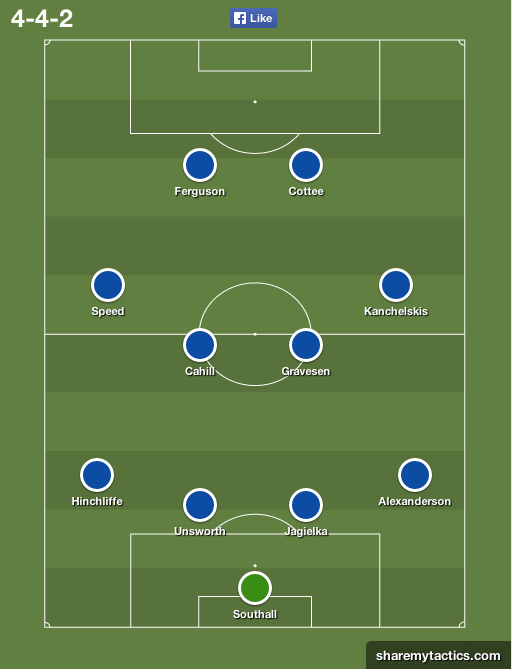