United face Real Madrid on Wednesday, in the glamour tie of the round, and are tagged as underdogs in the eyes of most bookmakers and experts. Yet there remains a suspicion that they can cause Real Madrid problems given their own attacking flair and newly found confidence on the European stage, as well as the fact that Mourinho’s men currently find themselves in a relative state of flux. The tie has been billed as Ronaldo (20 hat-tricks since July 2009!) versus van Persie (19 league goals), but there is so much more to absorb in this fascinating contest.

We have the reunion of two of the silkiest, and tactically astute, players in the game in Carrick and Alonso; attack-minded fullbacks in the form of Portugal’s Coentrao (so good at Euro 2012) and United’s Brazilian maestro, Rafael. But perhaps crucially, we may well see somewhat of a reversion to the early 2000’s in terms of ‘game approach’, as both Mourinho and Ferguson – underrated tacticians in their own right – ponder the use of a classic No. 10. Whatever the specific selections, it is fairly certain that both coaches will seek to deploy the classic ‘4-2-3-1’ system, with two holding midfielders and ambitious fullbacks.

United
The two big questions for the manager are around the central defensive position, and out wide. United started with Vidic and Evans versus Everton, which probably means Ferdinand is a certainty to start. By his side, there are benefits to both Vidic and Evans playing, but perhaps the Northern Irishman’s agility and ability to ‘follow’ the attacker out gives him the edge. But Vidic’s performance against Everton has certainly given Fergie something to ponder, and the value of the Rio-Vidic axis can’t be underestimated.

In the wide positions, Fergie could elect to go with how United finished the game with Valencia wide right and Rooney wide left. But there is a sense that Young (who is fresh) may well be called upon. In much the same way as he was thrown in versus City after a similar injury lay-off, Ferguson loves to deploy the ex-Villa man in these types of games, as he works incredibly hard in defensive duties, and times his forays forward well.

In the middle, Carrick will be joined by either Jones or Cleverley (or perhaps both) and will be crucial in that pocket of space between the penalty area and the centre circle. With Jones positioned slightly to the right, Carrick’s natural game is altered (which isn’t the case if Cleverley starts just to the left of the Englishman, but this stage may be too much too soon for Tom), so it will be important for Kagawa and Rooney to assist in the centre and not hug the touchline when out wide.

Real Madrid
Mourinho has a decision to make around the goalkeeper, but not the one we were expecting. His spat with Casillas is now well known, but in a strange twist of fate, the Spaniard has ruled himself out for a dozen games or so with a broken hand. Adan is expected to get the nod ahead of Lopez. Alonso is an injury doubt but is expected to make it. Khedira should slot in alongside the Spaniard, with Ozil, di Maria and Ronaldo ahead of them, and Benzema the lone striker. Though don’t be surprised if Mourinho throws in a surprise, either in the form of Higuain or Callejon, who can provide good width and is tidy in possession.

At the back, Varane (superb in the recent encounter with Barcelona) was rested for the Sevilla game and may be called upon if Pepe isn’t 100% match fit. One of those will start alongside Ramos at centre half, who has arguably been their most consistent player after Ronaldo this season; deceptively elegant and strong in equal measure. Arebeloa and Coentrao should flank the defence. Di Maria should start, not least because he provides great (often unappreciated) defensive work in much the same way Young does for United. His penchant for providing key assists in big games is something Ferguson will be acutely aware of. 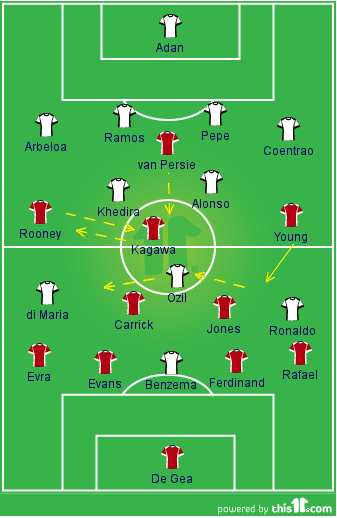 Ferguson (4-2-3-1)
Ferguson will seek to play deep, with five, often six, across the middle of the park in defensive transitions, but must be bold and trust his side’s form at present. Much like the game at Chelsea and the one at the Etihad this season, the brief will be to counter attack in a timely manner, seeking to exploit the inevitable space that will inevitably open up with Madrid trying to assert their dominance early on. Key to this approach could be the use of Kagawa as playmaker, or at least with him heavily involved from the left, as United won’t want the gap between defense and attack to be unduly large. The ex-Dortmund star has great big-game experience, doesn’t waste possession and is deceptively good at pressing the ball. The in-form player would be suited to the high energy, counter-attacking transitions. Emphasis will be on getting the ball out wide, and seeking to involve van Persie in a deep forward role. Ferguson will be mindful of letting Real have too much of the ball and will ask the defensive and midfield lines to stay compact. His approach to substitutions will depend on whether an away goal is achieved. If it isn’t, expect to see Welbeck or Nani from the bench in the second half.

Mourinho (4-2-3-1)
Real’s strengths can briefly be described as fluid and dynamic, with emphasis on lightning quick attacking transitions – often having six players attacking the opposition penalty area. Mourinho has excelled in forming a cohesive unit (if not psychologically), which thrives in the big encounters. He sets his team out to press early on, trying to force the error in the opponent’s half (trying to get that early goal), often tiring the players even before half-time. German international Ozil (Real’s ‘10’), is the major conduit between Alonso (deep playmaking duties) and the likes of Benzema and Ronaldo, and will orchestrate proceedings beyond the half way line. Khedira is the much-underrated box-to-box midfielder who also presses high on the opposition defensive midfielder, and can contribute with a goal by arriving late. Mourinho’s strength is also his weakness. He is bold in his approach to early substitutions, but these can often backfire.

With Ozil drifting from central areas and combining with Benzema and the wide men, instead of shadowing the German (or indeed Ronaldo), which simply leaves space elsewhere, a through marking approach should be adopted. The midfield trio must work closely with the active wide player and fullback in order to show Ozil into a further defensive line. The creator’s strength is finding the killer pass once he faces goal, so Rafael in particular must do what he does best: attack the ball early. The Brazilian’s best strategy against both he and Ronaldo however could be to attack, especially if the Coentrao is caught high up the field.

Though Young is likely to start in order to assist Rafael with Ronaldo, another option would be Welbeck. His form may give him the edge, and his attributes in the form of pace, defensive acumen, as well as the ability to dribble directly through the centre would be something Mourinho mightn’t expect. The Mancunian played this role with particular aplomb versus Liverpool at home of late, and if he doesn’t start then his use in the second half could prove pivotal.

The Dutchman’s goal threat has been outstanding this season, but his overall contribution, often in midfield zones, should not be overlooked. Describing himself as a ‘nine and a half’, both he and Kagawa will be central to United’s possession play. Carrick, Jones/Cleverley and Kagawa should use van Persie’s imperious hold-up play in and around the half-way line as early as possible, allowing the wide players and fullbacks to get beyond Madrid’s high line. Its an obvious tactic, but one that could be Ferguson’s best chance of an away goal. Henry’s famous goal for Arsenal in the Bernabeu came in similar fashion, as he bypassed the backline on the counter.

Here, Rooney’s role is also crucial. If the Englishman can be released by van Persie, leaving him one on one with Arbeloa, his ability coming inside on his right foot is known. As with Rafael on the other side, Evra’s timed attacks should give di Maria something to think about. Getting in behind, Rafael and Valencia had great success at the Bridge, just as Evra and Young did against Manchester City.

Vitally, United must learn the lessons from their last two games of major significance – against City at the Etihad last season, and against Barcelona in the Champions League final in May 2011. In both games, particularly the City one, the reds were nervous, tentative and essentially set up to contain the opposition, with too much space between the attacking midfielder and the lone striker. Rooney’s tactical indiscipline played a big part in both, but Ferguson may well choose to field him out wide here, with Kagawa perhaps used in an advanced role. United are a much more experienced outfit now of course, but come up against the reigning Spanish champions who know that Champions League failure will not be tolerated back home. United’s three-man centre must ensure that Alonso isn’t given free reign, but must also watch for the threat of the accompanying German players in midfield – each carrying a different threat. Real are somewhat of a wounded beast then, but a narrow defeat or a draw (with a an away goal being the target) would be welcome by Ferguson.