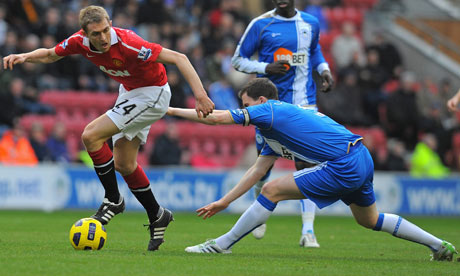 After a deflating night in Europe midweek, an away game in the league is hardly welcomed. United were at Wigan today and were in for a tough match, until going 2-0 up when Wigan seemingly gave up. A further two goals were scored, completing a 4-0 win that sees United once again open up a 4 point gap over Arsenal. Below are the main talking points from the match.

Edwin and Vidic keep United in the game

It was a first half of forgetful proportions for United fans. Wigan were the more attacking of the two teams and attempted 13 more passes than United – something that is rarely seen whether United are home or away. As the heatmap below illustrates, Wigan spent 32% of their first half in the final third of the United half. By contrast, United were only that deep in Wigan territory for 17% of the half. For all of Wigan’s territory, they created few clear chances. Smalling (again) and Vidic in particular were first to every loose ball and dominant in the air. Smalling seems to have a good luck charm about him for United. We’ve highlighted before that United tend not to concede in the Premier League when he plays and after today’s result United have only conceded 3 goals in the 495 minutes Smalling has featured in the league. Today though, Smalling was overshadowed by his more experienced partner. Unfortunately there isn’t a graphic that we can provide that shows the number of headers Vidic won but he was a rock all game (bar one wayward pass).

Behind Vidic and Smalling was Van der Sar. Aged 40 and in his final season as a professional player one could be forgiven for thinking that he’d be prone to the odd error. In actual fact he only had four saves to make today but each one seemed to be better than the last. Whether it was a long-range screamer from Figueroa or a rush off his line to deny Moses Edwin matched everything Wigan threw at him and if it wasn’t for him, United would have gone in behind at the break. Saves made (blue) by Edwin

“His composure is just outstanding as is his organisation of the defenders. Van der Sar had to make some great saves, while Vida and Smalling had to keep sticking their heads in to clear things.”

In our match preview, we felt that Chicharito would start today. Prior to this game he had started only 7 league games for United and scored 4 goals. He was somewhat on the periphery of today’s game in comparison to his strike partner, Rooney. Rooney attempted 45 passes whilst Chicharito only attempted 19 (although successfully completed 18 of them).

He did however show how deadly he is in front of goal: He only had three efforts on goal during the game, one was blocked as represented by the grey arrow. However he finished clinically with his other two efforts. The first a clever run across the front of the six yard box to tap home following a swift counter attack by United: The second goal was a clever one-two with Rooney before running clean through to finish expertly. This takes his total to 6 goals in 8 league starts for the club, a very healthy return of 0.75 goals per game in his debut season.

It’s worth noting the two men who assisted Chicharito’s goals. Nani now has 14 assists and leads the assist charts. Joint second on that list is Rooney who notched his 11th assist of the season. Both doing a lot of the unselfish contributing this season.

As for Chicharito; he’s certainly put forward a strong case to start on Tuesday. Berbatov hasn’t scored in over a month but in that time has only played just over 3 games (in total) and Rooney despite scoring today still isn’t as sharp as last year so there may be a case to include the form man.

Keeping the ball in the middle

United have been criticised, mainly by fans, for not controlling the central midfield battle in games lately. Today, Scholes and Carrick lined up together in the middle, arguably the two best passers in the squad. Wigan chose to press high and put pressure on every United player on the ball.

It was down to Scholes and Carrick therefore to keep the ball in the middle and control the game by not giving possession away. Between them, they made 109 passes and only gave the ball away 13 times. Both stuck to what they know best by playing short accurate passes and trying to get the ball wide where possible: The incisiveness and accuracy of United’s second half movement and passing was summed up by the fourth goal. By this point Wigan’s heads were down and United were strolling towards the final whistle but even so, 19 passes were completed before Fabio was able to coolly score his first goal for the club: Wigan started the game on the front foot and it certainly felt like one of the most nervy opening 10 minutes of a game we’ve had this season. Edwin had to make some great saves and the Vidic/Smalling partnership again excelled. After 17 minutes the deadlock was broken – a swift break saw Nani down the left play a low cross in and the unmarked Chicharito was able to tap it home having made a superb run. At half time, United were certainly lucky to be a goal ahead.

Composure returned to United in the second half with Nani starting to assert himself more on the game. After only 5 efforts on goal in the first half, United upped the tempo and had 13 more in the second half, however they’d have to wait until the 74th minute for a second and nerve-settling goal. A long kick by Van der Sar was won by Chicharito who played a clever one-two with Rooney before speeding through to coolly finish past the Wigan goalkeeper.

After the second goal, Wigan heads dropped and two more goals followed. The Wigan defence got their offside trap wrong and a long Gibson pass put Berbatov through who unselfishly squared the ball for Rooney to tap home into an empty net. The 4th was arguably the pick of the bunch – 19 passes were completed before Fletcher’s cross found Fabio at the back post and he was able to send the goalkeeper the wrong way to score. The only sour point of the game, came when Rooney elbowed a McCarthy in the first half. The referee did warn Rooney and give a free-kick so it’s unclear if further action will be taken. The game ended 4-0 and there is little time to rest now with a tough trip to Chelsea at Stamford Bridge coming up on Tuesday evening.