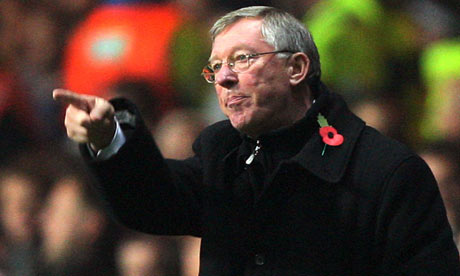 Manchester United manager Sir Alex Ferguson has revealed that he will not be buying anyone in the January transfer window, but has stated that Federico Macheda could well go out on loan following the successful stints of Welbeck and Diouf and Sunderland and Blackburn Rovers respectfully. Many Reds still believe that United are in need of a creative outlet from midfield if indeed the club are to challenge on both a domestic and European front.

When question about United bringing in some fresh faces come January the Scot snapped “Nope, not at all. Definitely not”. The obvious problem in signing a player in the January transfer window is that he will be ineligible for European competition. If of course the player hasn’t played in Europe this season, you would want to question why he hasn’t already been snapped up by a top European club in the first place. In the January of 2006, United were eliminated from European competition in the group stages and were able to purchase both Patrice Evra and Nemanja Vidic from Monaco and Spartak Moscow respectfully. Other players that have proved to be a success at their clubs having signed in January are:

Fergie was more interested in discussing his fringe and younger players rather than any speculation about new signings:

“I had a chat with the boy. I think he’s in the same position as Welbeck and Mame Diouf. We have a clutch of young strikers at the club and that was the reason we let Danny and Mame Diouf out. They are young and they need games. Kiko comes into that category now. “

He went onto add:

“I didn’t want them to go, but seeing how the squad is shaping up with Michael Owen fit again now. Chicarito has progressed really well. We’ve brought in Bebe as well. He’ll be a striker. I can play Obertan in that position also. In the case of Danny Welbeck it’s proved a point that through consistent football he has progressed dramatically, fantastically well. In his two previous years he played in two cups finals. He played in the semi-final against Everton. In a consistent nature he didn’t have enough football to bring the progress we’re seeing now. He’s been fantastic at Sunderland. He must eventually get in the squad for England through his performances this season. That’s exactly what we wanted. When I had a chat with Kiko I explained to him the Welbeck situation. The experience of going to another club can pan out exactly the same for him.”

3 Comments on Fergie: We won’t buy in January