Great performance tonight against a poor Kiev side, they really didn’t look at the races.  But our counter attacking play really made them panic and hurry into mistakes, which made them look amateurish at times.  Ronaldo, Rooney (as always) and Tevez were superb – short little intricate passes combined with intelligent movement off the ball and great overlapping play, particular by Wes Brown.  Anderson is turning into some player as well.  I’d seem him play a few times for Porto and clips of him in action for Gremio, however I didn’t think that he would look so accomplished in the centre of the park.  I felt he would be better played higher up the pitch to showcase his skill and vision, however he looks brilliant at the moment and his distribution is first class.

How do you fellow reds feel we have played in Europe so far?  The worse game was the Roma game when we were a bit fortunate to get a win (Roma deserved something out of the game) but away from home I think we’ve looked good.  Can this team push on in Europe and give us exciting performances that got us off our seats in the late 90’s?? 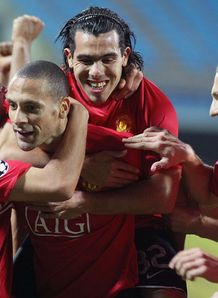