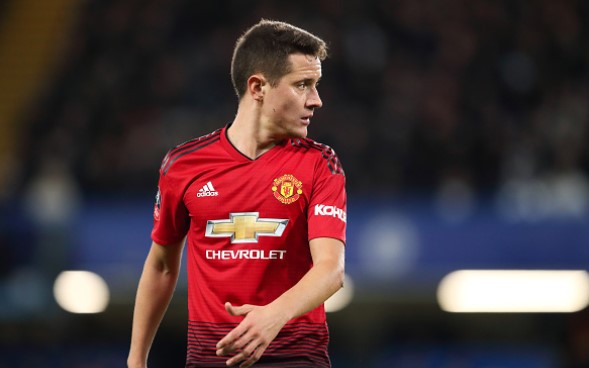 Since Ole Gunnar Solskjaer became Manchester United’s caretaker manager, several players have improved massively. Whether that was just an upturn in form or a true upgrade on their qualities, it is obvious that the players are performing far better and thus the results have been much better. The team is fighting for the Champions League spot, something that without context might sound odd to boast about, but given how far behind Arsenal and Chelsea the Devils were, this is a big thing for the team.

One of the players who have improved massively, not just relatively to the first part of the season, but also compared to previous seasons, is Ander Herrera. The Spaniard has been nothing short of phenomenal in the past two months, exuding confidence and leadership on the pitch. That was especially obvious against Chelsea on Monday night, as his cause was helped by the fact he had scored the opening goal.

So, what has been so great about Herrera under Solskjaer?

Herrera has been doing great alongside Nemanja Matic, as the two players truly are complementing each other very well, offering differing things to this team. The Spaniard is a typical “workhorse” who never stops running, but funnily enough, he is far more intelligent than usual “workhorses” would be described to be. His biggest defensive influence is during either counter-pressing or when he is given the job of strictly marking a single player, as we have often seen him do under Jose Mourinho.

Whenever Man United lose the ball, Herrera seems to be standing right where he is supposed to be. In the last 10 matches, he has 5.5 successful tackls per match and he averages six interceptions. As Solskjaer’s Man United is not attacking with too much width, Herrera has to work defensively in narrower areas, which helps. He often wins lost possessions, those balls that do not seem to be belonging to any team at that moment, which also shows his intelligence, to know when and where to be.

What is even more odd – Herrera does all of this work in such a clean manner. He has only three yellow cards and makes 1.3 fouls per match, a really good tally for a defensive midfielder. Herrera can be nasty against bigger sides, but generally, he is far from that in his usual displays.

Herrera does not have great influence on Man United’s attacking performances and that is normal. He rarely creates chances, his last assist came on 30 December last year and with 1.2 key passes per match, the Spaniard is simply not at the level of some other players in the team. Good news – he is not the player that should be doing all those things.

But having in mind how many defensive actions per match he makes and how often he is chasing the ball, those numbers are not as bad as they would be if he was a ‘number 8’ or something similar. His movements on the pitch are really good and against Chelsea he showed he can free himself up even more and with more confidence when attacking, Herrera could be dangerous for opponents when coming late from deep areas.

No wonder everyone around the club loves Ander Herrera.