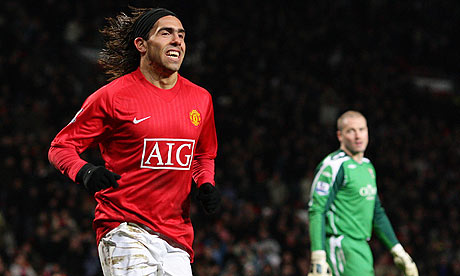 A stunning 4 goal haul for Carlos Tevez was enough to see off the never say die Blackburn Rovers – and the Argentinian’s hat-trick goal was a true contender for goal of the season.

Manchester United made 11 changes to their side against a Rovers side arguably at full strength, but there was no doubting the 2006 League Cup winners attitude to the cause as they threw everything but the kitchen sink at their Lancashire rivals.

Nani and Tevez went close before Darron Gibson’s header was cleared off the line – and five minutes before the break, Tevez scored his first. Ryan Giggs floated a free kick in and Tevez scored from what appeared to be a combination of neck and Blackburn defender. The Argentinian then turned provider, returning a one-two with to Nani – who to this point had been a mixture of fabulous and frustrating – but the precocious youngster slammed home a second moments before the break.

After a first half of domination from the home side, Blackburn made a change by bringing on Benni McCarthy at the break. It was a change that proved instantly effective as the South African who was once linked with United slid past Ben Foster to half the arrears on 47 minutes. Moments later, however, Tevez converted a penalty won by himself although veteran Oojier felt hard done by.

The following goal however will live long in the memory – just 4 minutes later, Anderson made a 60 yard burst, knocking a ball into Giggs who exquisitely flicked back, then one-two-ing with Tevez who slid the Brazilian through. In front of the Stretford-End, with the crowd encouraging him to score his first goal in his 18 month stay at Old Trafford, Anderson laid the ball off to Tevez who scored the goal to seal his first United hat-trick – joy for Tevez, and ironically greater cult glory for the brilliant Anderson.

United toyed, eased, and brought on Evra and Manucho – and welcomed Scholes back from injury – then Blackburn rallied late on and scored through Derbyshire and McCarthy (the second in injury time) but any thoughts of a unfairly close scoreline were eliminated by Tevez’s 4th goal in the dying moments – a super half volley after Anderson magnificently played him in.

The Red Devils now enter the semi-final draw for the first time since they last won the competition.