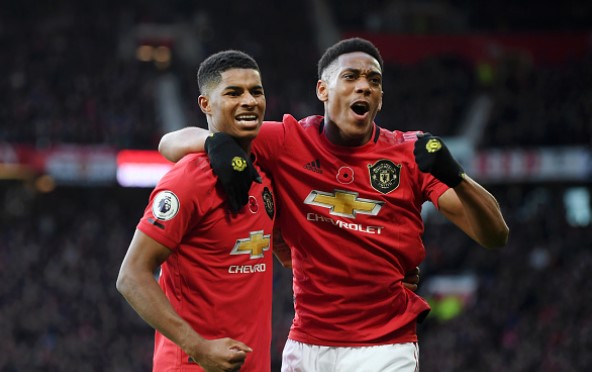 Manchester United have continued with their good results on Boxing Day, as it was Newcastle United who could not keep up with them this time. The Red Devils came back from behind to comfortably beat the Magpies 4-1 at Old Trafford, as Anthony Martial’s brace sandwiched the goals from Mason Greenwood and Marcus Rashford, following Matthew Longstaff’s opener.

Man United did not start well, as Newcastle were the team to create chances early on and even go on to score. However, quickly after that it became obvious in which direction this game would go.

Newcastle opened the match with a good chance Dwight Gayle did not materialize, but just couple minutes later Matty Longstaff scored for the second time against Man United to put Newcastle ahead. That did not last long, before Martial’s first goal happened, and that moment was crucial for the whole game.

It was the manner in which Man United equalized that showed they would have a much easier task of getting a win then it would first appear. It was a good combination between Pereira and Martial that ended up in a goal and Newcastle afterwards invited the hosts to finish the job. Couple of individual mistakes led to Greenwood’s lovely, though deflected strike and after that Man United went on cruise control until the end of the match.

Despite all of the goals that followed, it was clear that United still have defensive issues. Harry Maguire and Victor Lindelöf were yet again shaky in defence as they always felt like choosing odd decisions. They were misjudging distances and their movements were not in sync, which led to those early chances. The gaps were there for Joelinton to exploit too and on the occasion of the goal he even had enough time to turn and choose his next move, setting up a goal for Longstaff.

Mason Greenwood’s performances keep getting better. The youngster got his chance to start against Newcastle as Daniel James was not in the lineup and he took that chance completely. This was his fourth goal in as many matches and the way it happened showed a kind of ruthlessness. He got the ball after Fabian Schar made a mistake and he immediately sent a shot from distance that ended up hitting the bar and then going in beautifully.

Ole Gunnar Solskjaer will have to think about him more in the coming matches, considering his form.

Many have been mentioning how well Manchester United do on Boxing Day matches and this year that was confirmed once more. After some not so good performances, this one from United was at a much better level, winning for the 21st time on Boxing Day since the Premier League started. Before the match, they had won 80% of matches on Boxing day and that percentage has gone up since.

Last year around this time this side started making up the lost ground under the then-caretaker Solskjaer. Hopefully those performances will be replicated this year too.