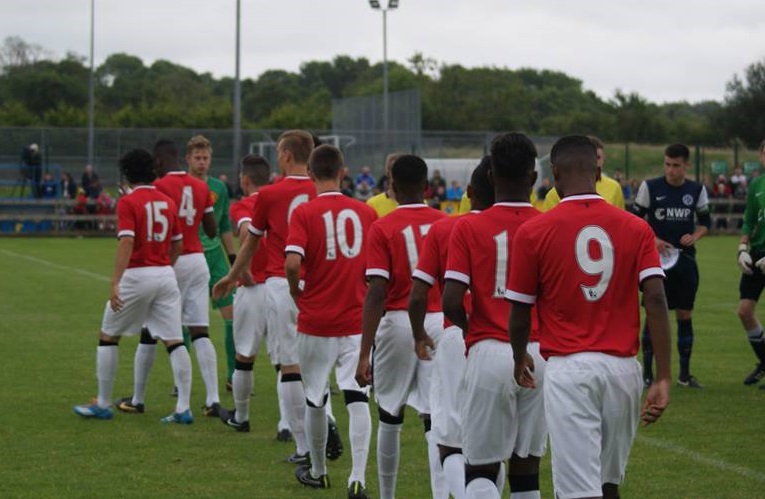 They may have changed the sponsorship but it’s business as usual at the Northern Ireland Milk Cup.

Manchester United have been sending teams out to Coleraine since 1989/90, and it was interesting looking back at the squad thirty-five years ago. Two players, Ian Wilkinson and Colin McKee, went on to play for the first team but most of the lads never made it in the game. Interestingly, one of the finest talents at the club, Adrian Doherty, was also in the squad but his career was sadly halted through injury. Now he was some player!

The lads reached the final in their first appearance only to lose 1-2 to Newcastle United. They had to wait another two years before eventually lifting the trophy for the first time with many of the players that would become the ‘Class of 1992’.

Two-and-a-half decades later and Manchester United are in a different league, but it’s pleasing to see the club still support a tournament that has changed little in all that time.
United have always been pioneers in many aspects of football and at this year’s tournament the organisers decided to experiment with a younger age group for the first time. So together with Partick Thistle, Dublin & District Schoolboy League and a Northern Ireland International Select, the Reds sent a young team over the Irish Sea to participate. The matches were played on Friday and Saturday before the senior teams arrived for the Tournament Parade through the streets of Coleraine and into the town’s Showgrounds on the Sunday.

The youngsters defeated Partick Thistle 8-1 on Friday evening, DDSL 4-0 on Saturday morning but were defeated 1-5 by a stronger international outfit on Saturday afternoon. Regardless of the outcome, it was great experience for the youngsters.

The senior lads were playing in the Premier Section as usual and were drawn against Gold Coast Academy from Australia, local side County Armagh and CSKA Moscow. The results of these three games would determine United’s position in the final table and thus whether or not we could finish in the Top 4 and reach the Milk Cup stage.

Borg is a left fullback from London and has been at West Ham for some time. Born in Sutton in 1997 and attending the John Fisher School, he had already tasted international experience when he was part of the West Ham team that won the GIS Cup in Florida last October. Although only 16, he showed enough promise whilst with the Hammers to feature three times for their U/18 side last season and was also named on the bench for an U/21 fixture against Chelsea in early January. Whether United offer him a contract will depend on the usual playing factors but also if we are prepared to pay West Ham compensation which is reported to be in excess of £200,000.

Ogochukwu Obi is perhaps better known after finishing top scorer in the Junior Section of the Milk Cup last year. Ogo, of Nigerian descent, scored ten goals in five games helping Watford to third place and scored twice against Liverpool in a 6-2 victory. Apparently an Arsenal fan, Ogo was reported to have had a trial with Belgian outfit Anderlecht before joining up with the Reds earlier this month. He featured in Watford’s U/18’s and U/21’s last term and has been offered a two-year deal by the Hertfordshire club.

The United scholars were mostly local lads who have been with the club for some time and featured in our U/18’s last season.

The first match against Gold Coast Academy at the Coleraine Showgrounds proved a whitewash with the youngsters running out comfortable winners. When you score eleven goals in a match it’s almost impossible to tell if you have played well or the opposition were extremely inexperienced. Perhaps in this match it was some of the former but more of the latter.

In the second match against County Armagh the 3-0 scoreline was probably indicative of our experience with the locals doing their best to upset our rhythm with a more physical approach.

Finally, last nights clash with CSKA Moscow finished 2-2 and was a very even contest. Clearly the Russian side contained players who had been well schooled and they were able to match United across the pitch.

There have been plenty of reports of the games on various social media sites so I won’t add any others, however there were many interesting observations to take away.

Here are my Top 10 Tournament Takeaways so far.

1. Tactics. United set up with a 3-1-3-3 formation with any three of Reid, Williams, Tuanzebe, Warren and Borthwick-Jackson playing in the backline. Charlie Scott then sat in front of the back three as cover and was able to move up and down the central spine with ease. The fact that we played this way against Trafford FC in a pre-season friendly leads me to believe that even at U/18 level, United will be playing with wing-backs this season.

2. Versatility. In the game against County Armagh, Dearnley replaced Mitchell and Paul McGuinness immediately switched to a 4-2-1-3 formation. He kept this shape with Dearnley in the team v CSKA. Clearly the players are comfortable playing in a range of formations and the team selection will most likely dictate the shape.

3. Midfield. Jordan Thompson has played left fullback and the left side of midfield for the Academy for much of his senior career. Watching him in central midfield was a revelation and he has been incredibly impressive. His goals against Gold Coast and County Armagh were both excellent and I hope to see him in the middle of the park for the U/18’s more this season.

4. Forwards. In Marcus Rashford and Demi Mitchell, United have two incredibly talented players who can do most things at will. They are definitely the players to watch. Rashford in particular seems to be stronger and more confident. Consistency will be important for them this term as they both enter their second year at the higher level.

5. Triallist #1. Ogo Obi is an interesting player. He can be anonymous for 15-20 minutes then suddenly score two goals out of nothing. His link up play is good, he is not overly selfish, but when he gets a sniff at goal he is lethal. He might not have the technique of others already at the club but he is strong, direct and deadly. If we are looking for a different option up front, then Obi might be an interesting purchase given he has rejected a contract offer at Watford.

6. Pace! This group has pace to burn both up front, out wide and in defence. In central midfield less so but if our forwards are willing to work hard we could be in for an exciting 2014/15 with this crop.

7. Leadership. Tuanzebe is captain of the side but there are a handful of others who clearly set the tone in terms of communication (Williams, Thompson) and leading by example (Borthwick-Jackson and Scott). All of these lads have good temperament and are rarely phased.

8. Triallist #2. Oscar Borg, our other trialist, looks incredibly mature for 16 years old. He listens well to instructions, has pace to burn and likes to get forward. Defensively he doesn’t dive in but prefers to jockey an attacker, making him pass the ball backwards. Given the likelihood of playing with wingbacks moving forward he would be a welcome addition to the squad if the Reds are willing to play a sizeable fee for him.

9. Killer Instinct. I have watched the juniors go three or four goals up many times and then ease off. It was incredibly noticeable that the coaches were urging the team to push forward at every opportunity regardless of the scoreline. This group has a tendency to be blasé on occasions so whether or not this is ‘group’ specific or the setting of a new ‘tone’ under Van Gaal will be interesting to watch.

10. Physicality. Particularly up front and in midfield we still lack core strength. United have always looked at technique first and foremost, but our successful teams have always had strength in midfield too. Pogba and Tunnicliffe in 2011 were prime examples. I like Thompson a lot but he isn’t in that physical class and can be knocked off the ball. More than anything else this may well be our Achilles heel this season, particularly in the FA Youth Cup which we discovered at Huddersfield last season.

So, some personal observations about our Academy for 2014/15 and with a little luck I think we should do well.

We now play Partick Thistle tonight in the Milk Cup semi-final at Coleraine Showgrounds (8:00pm) and if we are successful will face either Vendee of France or CSKA Moscow once again tomorrow night in the final.

United have a great tradition at the Northern Ireland Milk Cup winning the tournament five times, including three times in the last six years. Let’s hope this latest crop of talented teenagers can add their name to the trophy.