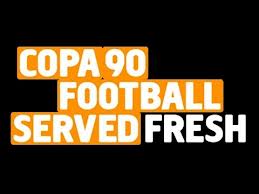 Stretford End have writers that provide knowledge, debate and some fantastic articles. It was inevitable that we would be approached at some point to feed this to the masses in other ways. Copa90 and HTC asked Stretford End if we could support them on their programme – The Euro Fan.

Unfortunately all the decent writers were unavailable so they were left stuck with me to guide them around the city and give a United point of view to the European experience.

This is what happened.

@Copa90‎ is a YouTube based football channel which features stories from all over the world and is tapping into the social media love of the game. One of the main shows that Copa90 produce is @TheEuroFan‎ presented by Radio 1 DJ and comedian, Tom Deacon. The Euro Fan travels to games across European competition in order to take in the local experience of match day through meeting fans, taking in the atmosphere and seeing what the host city has to offer.

I was approached to give Tom and the team a matchday experience for a European night at Old Trafford. Copa90 were working in partnership with HTC to record the moments of the day that summed up the Champions League and Manchester United.

HTC provided the team with their HTC-One smartphones to document the day in as many ways as possible. Champions League nights are some of the most photogenic experiences fans will get when visiting Old Trafford. The dark nights and bright lights give the ground more emotion than you may find on the standard Saturday afternoon. Larger numbers of away fans with a more continental approach to support mean you see plenty more colour and singing which can bring out the better side of United fans.

I met up with EuroFan Tom and the Copa90 team at the National Football Museum located at the Urbis in Manchester City Centre. I was showing the team around the museum and the displays that it offered. Tom challenged me to a penalty shootout competition whilst in the museum, whilst we both scored 3 out of 3 Tom was somehow judged the winner. I took solace in the fact my left foot delivered a faster effort than Toms… Small victories.

After the Football museum we wandered across to Sinclairs pub in the city centre where we found a several hundred Real Sociedad fans who taking advantage of drinking time and an opportunity to sing. It’s rare now that we see much trouble with foreign fans coming across and all the Sociedad fans wanted to do was enjoy the city and experience of Champions League football. We had a few games of football tennis and joined in with some singing before it was time to head on over to Old Trafford.

One of the features of the HTC One smartphone is Zoe shots. Rather than a single photo or a long video, these are several second blocks you can link together to share an image of the day as a whole. The below link gives you an idea of the effects this can provide in a short 30 second burst
HTC One – Zoe shots – Manchester United

We picked up a particularly happy Sociedad fan on the tram to the ground who despite speaking no English was able to show us his love for his club. He was also eager to show the gifts he had bought for his newborn son.

At the ground we met up with @DaiGreene the former 400m Hurdles World Champion who was taking in a rare game. With Dai’s training and travel it makes it difficult to attend many matches. We had a sing song with Pete Boyle and the fans in the Bishop Blaize before making our way down Sir Matt Busby Way and into the ground. I usually sit in the Stretford End as many of you know but this time I was in the Sir Alex Ferguson Stand with Tom and Dai. HTC and Copa90s tagline is changing the game and this was certainly true for me on this occasion as the top of Sir Alex Ferguson Stand offered me a totally different view of the game. In my usual seat I felt much closer to the game and maybe missed some of the more tactical aspects of the game.

In the Sir Alex Ferguson Stand it was possible to see the game almost as a chess match, seeing the movements of all the players as the play developed. Within minutes we were a goal up through an own goal and looked to dominate. As the game wore on United created plenty of chances and a second seemed a matter of time but it just wouldn’t come. The last few minutes were more nail biting than hoped for, much like the season so far so at least Tom was getting the current United experience.

The final whistle went and the points were in the bag finally.

I thanked Tom for the experience of the day and off we went into the night. Tom had been given the EuroFan experience at Old Trafford and I was grateful for 3 points plus a different look at a European night at Manchester United.