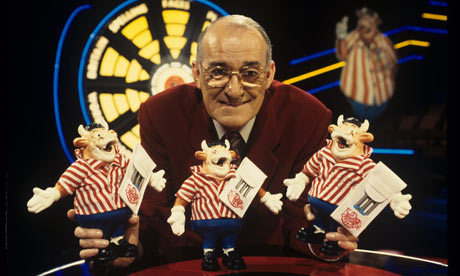 Digital television channels are not just the home of Alan Partridge’s war based game show ‘Skirmish’ on UK Conquest but it also offers a delight of old television game shows (they have to fill the air time somehow) One of the ‘great’ shows that seems to be on endless repeat is the 80’s darts based game show ‘Bullseye’. For the young or anyone who had better things to do, the premise behind the show was a ‘professional’ and ‘amateur’ darts player competing to win prizes. These prizes were top of the range and included things such as speedboats, microwaves and video cassette recorders.

What relevance does this have to United I hear you ask?

This summer it seems the United management team are trying to bring the Bullseye format back to the mainstream.

The contestants in our own personal game are David Moyes and newcomer Mr Ed Woodward. Ed is looking to win the lot and take home the biggest prizes for his partner David. They have safely navigated the opening rounds and are now into the second round of the game. In this part of the game the prizes they play for are determined by a throw of the dart and the area it lands in…

INNNNNN THREE – A throwback to the Britpop era, Leighton Baines

and WOODYS SPECIAL PRIZE! If all else fails the returns of Anderson and Fletcher will be like new signings.

Ed and David are going for number 4 first… oooo so close but that’s number 3 and a bid for Leighton Baines. You were close boys but just missed out on that one. They decided to have a go at hitting number 1, after three throws of the darts it was again another missed opportunity. Things are starting to look a little desperate now lads, what are you going to do?

Many think being able to hit the number 5 would have been a success but after missing every other throw it appears this prize wouldn’t satisfy the people back at the Old Trafford Arms. The first throw is close but not quite on the money, a few attempts earlier and the shot might have been easier to make. With every throw it’s getting harder and it looks more and more likely the boys for the Old Trafford Arms are going to go home empty handed. The last throw is made and again it just misses the mark.

The team are dejected and as Jim Bowen shows David and Ed what they could have won the colour drains from their faces. As Fabregas, Thiago and Fellaini are all taken away there is a surprise yet to come. For being such good contestants Jim is going to give the pair the special prize anyway. The boys are delighted and think this will definitely satisfy everyone back in Manchester…

Jim can’t resist though showing the pair what the star prize would have been and as the curtains pull back to reveal the Premiership, it dawns on the pair just how wrong their game plan appears to have been.

This isn’t a guaranteed result for the boys from the Old Trafford Arms but the longer they take aiming those darts, the smaller the targets become.

If you are not used to be aiming at such targets Mr Woodward i would advise it may be best to aim early. The targets can only get smaller and harder to hit.