United travelled the short distance to Merseyside to take on Everton in the final game of the opening round of Premier League fixtures. Shinji Kagawa made his debut but Van Persie was only deemed fit enough for the bench. United had to start with Carrick in defence as Rio Ferdinand became the fourth centre back to miss out through injury. Everton, in front of their home fans played Fellaini up high as the supporting act for Jelavic.

I was most certainly doing Everton a disservice when I saw the line-ups. It read Gibson-Neville in the centre and my immediate reaction was one of delight as it dawned on me that I associate them with immobility and a lack of pace, not to mention that they’re former Reds. Moyes and Everton had other ideas though. Fellaini played behind Jelavic with license to drop deep and become a second striker. When in possession, Everton simply bypassed Neville and Gibson, with the high ball (long ball wouldn’t necessarily be accurate) to Fellaini working perfectly pretty much every time.

The true cleverness of how Everton played though is found in what they did when they weren’t in possession. Up until they scored, Everton pressed high. United had selected passers who whilst happy being pressurised, would rather some space. Even deep in the United half, Everton, starting with Jelavic, pushed right up onto United forcing a long ball to be played and possession generally retained.

Having scored, Everton could afford to be a bit more defensive. With the bigger team and men behind the ball, they knew that they could repel crosses and make openings hard to come by. In the end, it was more comfortable than Everton could have predicted it might have been. The high pressing coupled with a fast tempo stifled United – we had no answer to it.

There were just two players who I’d single out for praise from a United point of view. Firstly, the goalkeeper, David de Gea. Selected over Lindegaard, he single-handedly kept United in the game during the first half. Excellent saves were made from angles, from close range, from free kicks, and from off his line. As with much of 2012, de Gea excelled and came to the fore when those in front of him were being outplayed. Even his calmness and kicking off both feet, under pressure was impressive. He could do little about the goal, nor about the Osman shot that rattled the bar – he certainly played a big part though in ensuring that United’s goal difference after the first game of the season was no worse than -1.

The other player worthy of being mentioned in this section is Shinji Kagawa. Deployed in front of Cleverley and Scholes he was a menace. His movement coupled with an outstanding footballing brain (ability to know where the defenders were and where his team-mates were moving) lead to many of United’s best moves. His golden moments involved passes slipped through to Welbeck, shimmies away from defenders, and the awareness to lay the ball off to Cleverley just yards out rather than trying to spin and shoot. Whilst not quite always on the same wavelength as those around him, it’s clear that with more playing time, he’s going to be a star.

The big bully with the afro

Fellaini’s performance at Old Trafford earlier this season was good and received plenty of acclaim, but what he produced this evening fell into the ‘world class’ category. His job was made somewhat easier as Gibson and Neville took a lot of the defensive burden off him. The aim for the evening was simple: let Neville and Gibson win the ball back in order for a high ball to be played towards Fellaini. It’s not so much that he’s big and wins most headers, but his touch for such a large guy was outstanding. Often, he’d manoeuvre his body in such a way so that he’d bought enough space to bring the ball down. Even with the ball at his feet, he showed that he’s intelligent and capable of linking play as well as being direct.

United were quite simply bullied by Fellaini and unable to find an answer to stop him. His goal, a bullet of a header was more than deserved and terribly inevitable. Carrick, who’s not small, was marking him and stood no chance of getting close. A truly awesome performance from a player that will be close to impossible to stop should he and those around him perform to those high standards again.

The pain of losing players

United had to go into the game with just one fit centre back from the first team. Vidic, on his return from a long lay-off did alright but tired towards the end. He was partnered by Carrick – a player capable of playing a defensive role but unsurprisingly would be caught out positionally and physically a few times. Interestingly, Valencia was preferred to Rafael – the Brazilian hasn’t been back long from the Olympics and United may have wanted a bit more power at the back given the loss of Ferdinand.

Carrick was chosen to play centre back over Scott Wootton – a sensible decision. Scott did well on tour but throwing him into a game like this would have been too much for a player who’s unlikely to have a long-term future at the club. The downside was that United lost Carrick, the cog and engine of the team last season, from the middle of the pitch. Whilst not a physical player, Carrick’s size may have helped against Fellaini. Cleverley actually had a very solid game but Scholes was somewhat erratic and needlessly rash both with and without possession. Carrick’s consistency was certainly missed.

The lack of a physical presence in the middle brings me back to something I brought up 18 months ago. Whilst the finer details may now be inaccurate, the sentiment remains the same, I would love to see United sign a physical midfielder. With Fletcher’s return not guaranteed, it’s something United lack in the middle. Too many of the central midfielders excel in the same areas and whilst small, possession-based central midfielders may always flourish abroad, the Premier League requires a sense of physical competitiveness. Tonight was a good example of why United could benefit from more variation in the middle. Whilst I’m incredibly excited by the Van Persie signing, I can’t help but wonder if that money could have been more wisely spent – certainly it’s galling to see City linked with de Rossi even when they have Yaya Toure.

Hang your head in shame

United’s performance on the whole wasn’t near as bad as will be made out. Some players though played below a standard that fans have come to deem acceptable. If I was being really harsh, I’d suggest Evra was one of them. He was ok defensively but wasteful when attacking with too many passes inexplicably played straight to opponents. He, like many players seemed at times reluctant to cross and then infuriated as balls that were crossed in were poor.

The main culprits though were Nani and Rooney. As we’ve come to know, Nani is either unplayable or appalling. Tonight he was the latter – too many times he tried to do things on his own and be too clever. For a player who’s technically so skilful, it’s remarkable how often he messes up the simple things. No prizes for guessing though that his most frustrating trait was his inability to beat a first man with a cross, from open play or set play. Not a good night for him but he’ll win us plenty of games this season.

The signing of Van Persie adds more competition up front. Whilst Rooney should hopefully be paired with him a lot, it also means there’s no excuse for Wayne to perform badly given that he can now so easily be replaced. Tonight’s performance by him was one of his worst for the club. He picked up good positions but he appeared lethargic, slow and uninterested. There were times when he appeared to link up well with Kagawa but almost every move broke down with Rooney losing possession. For whatever reason, he looked terribly unfit and the fight that was raging inside him as an angry young man a few years ago seems to have completely disappeared. How he wasn’t subbed off is a complete mystery. He’ll no longer be able to hide though and with Van Persie, he’ll hopefully not be undroppable.

Plenty of credit must go to Everton’s defenders. Hibbert’s somewhat unfancied as a player but was excellent against Nani, Young and Evra – blocking crosses and making smart tackles. The star for them though was Jagielka – a goal-line clearance and a couple of fabulous last man tackles helped earn his team the points as much as Fellaini’s brilliance.

I’ve already briefly touched upon the fact that Cleverley was solid but want to emphasise it. He was buzzing around the pitch always wanting the ball to try and get it forward. Even when United didn’t have possession, he was back and trying to be as physical as possible. A tough night for him but he certainly didn’t let anyone down and will hopefully retain his place next weekend.

Robin Van Persie came on to make his debut but didn’t see enough of the ball to impress. His corners were certainly better than Nani’s but he seemed to be lost in amongst the sea of blue Everton shirts. There was no hint as to whether he’s struck up any kind of partnership with Rooney yet – personally, I’d like to see him with Welbeck as I think they’d compliment each others styles nicely.

Everton were good value for their win. Whilst United tried to play the better football, only one side created the better chances – possession is valuable but only worth having if it’s used well. United were certainly not as bad as will be made out though; a few individuals aside, there were some encouraging passages of play as a unit but more often than not, Everton simply had too many men behind the ball.

A disappointing result but one that shouldn’t be read too much into. United will not often face a Fellaini & co style set-up and game one of a long season will rarely define the 37 games that follow. There are things to work on but with some defenders back and more composure/better decision making and crossing in the final third, United will hopefully be back to normal against Fulham this weekend. As for Everton, an impressive start but can they replicate that every week as opposed to just in the big games? 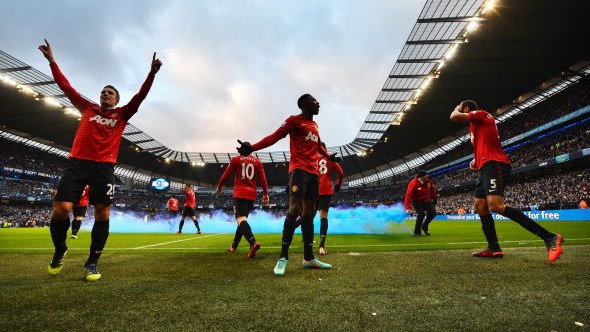