Robin Van Persie should choose Manchester United over Manchester City says ex-red Gary Pallister, suggesting that the Dutchman will get ‘frustrated’ at United’s rivals due to their strength in depth up top. Pallister played for United for nine years after signing from Middlesbrough in 1989 – his £2.3million transfer fee was a record for a defender at the time. Robin Van Persie is currently at the centre of a transfer wrangle between United, City and Juventus – whilst Arsene Wenger and a number of players would obviously like to keep him at Arsenal. The latest odds suggest that Juventus are leading the way for his signature.

Arsenal are reported to be holding out for £25million, however United’s offer was thought to be in the region of £10million. Former United forward Dwight Yorke, also thinks he should head to Manchester – if he wants to win trophies:

“When you do that, you want to win tropies — and the city of Manchester is the place to be if you are going to try to win something. I think it’s a personal choice and nowadays it is about money. But I don’t think you will go wrong by going to either of those two teams in Manchester.”

Robin Van Persie, who scored an impressive thirty league goals last season to win the Premier League’s golden boot, looks likely to be playing his football away from The Emirates next season. However, it is still unsure whether it will be at the Etihad, Stadio Delle Alpi or Old Trafford.

Where do you think Robin Van Persie will end up next season? Do you think he would be a good signing (at £25million), considering his injury record? And what do you make of Pallister’s comments that City’s strike force options would frustrate the Dutchman?

Brought to you in association with BWIN for football online betting. 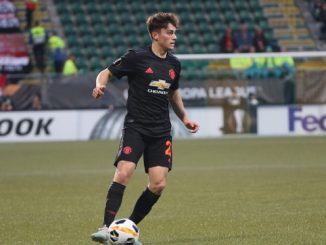