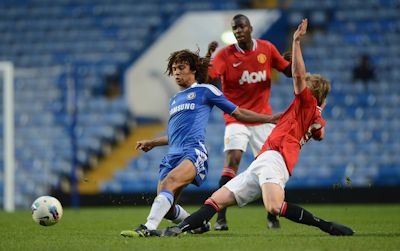 And it came to pass on Friday night that there was to be no end-of-season trophy for United’s Academy this time around. With the league title out of reach, one might suggest that as United’s high standards go, it’s been a disappointing campaign. But no, looking beyond the results, as is necessary at this level, there’s a whole plethora of things to be pleased with and excited about.

Cast your mind back to the beginning of the season and United lost six out of their opening nine league games (whisper it, but United have only managed six league wins all season!). We were, to some extent, watching a team get bullied – United’s pool of players were not only inexperienced but physically small. It was that issue of stature and power that they found hard to cope with; losing 50:50s; being beaten aerially; and simply finding themselves out-muscled.

A huge chunk of credit has to go to Paul McGuinness and his staff for persisting with an attacking system and approach – but more on that and its importance to the club as a whole to come.

To get an idea of the kind of experience in the squad this season we can break the team down into second year (final year) scholars; first year scholars; and schoolboys (U16s or below who don’t train at the club full-time yet). So far this season we’ve used 8 second years; 17 first years; 4 schoolboys; 1 trialist; and 3 over-age players. Don’t work on the assumption that all the second years play every game though!

Even amongst the second years, experience was somewhat limited. Whilst Blackett and Van Velzen were most of the time guaranteed starters in last year’s successful FA Youth Cup campaign, the others fared differently. Goalkeepers, Liam Jacob and Joe Coll played second-fiddle to Sam Johnstone; Luke McCullough missed almost all of his first year with groin injuries; and the trio of Charni Ekangamene, Tom Lawrence and Luke Hendrie were often little more than peripheral squad players.

As the season progressed, it became clear that in one respect it was going to follow a similar pattern to the first team’s. Injuries hit the squad in virtually every area and as one player would return, another would get injured. The area that felt it in particular was the midfield, as arguably the first choice five of Ben Pearson, Joe Rothwell, Mats Daehli, Adnan Januzaj and Tom Lawrence all missed lengthy spells – often at similar times.

Despite the various set-backs, United went full steam into the FA Youth Cup. Paul McGuinness preferred to play players out of position (e.g. James Weir, usually a central midfielder, played at right back) rather than change his system due to unavailable players. Knowing how well we could play but appreciating how hard the season had been, I cautiously suggested that getting to the quarter finals would represent a good campaign – draw dependent though, we could potentially go further or find ourselves in trouble early on.

As things went, we had a mixed bag of ties. Torquay at home was straightforward but then followed Derby who’d gone away to Arsenal and beaten them. Boasting several players who’d featured in their first team, Derby provided a stern test which only goals from Jack Barmby could help United overcome. Once again the draw was unkind as United went on an unfancied trip to Swansea – a side who played football in the style of their first team and who’d beaten one of the competition’s favourites, Liverpool. A youthful side trounced Swansea 5-1 in an astonishing performance – by this point, schoolboy, Nick Ioannou had come to the fore and made sure that he was first choice centre back in this competition (he’d play ever other game in the cup run).

Old Trafford was the setting for United’s last win in the competition. Like Derby, Charlton had players with first team experience and although many weren’t older than the United boys, they were considerably bigger. The tie was settled deep into injury time as James Wilson, an exciting talent from the U16s, scored to seal a 3-2 win. For the second year running, Chelsea were the semi final opponents over two legs.

This year, Chelsea were better. The breakdown of their squad in terms of players and the year they were in was not too dissimilar to United’s but they had some crucial experience and expensive, exciting talents in Piazon and Feruz up front. An even first leg in Manchester saw Chelsea take a 2-1 lead back to London. The second leg, like the first was incredibly tight with little between the sides and a draw on the night seemed fair, taking Chelsea into the final with a 3-2 aggregate win where they’ll face Blackburn. Jack Barmby scored in every round of the competition but other players also shone – the two schoolboys, Ioannou and Wilson; the increasingly influential Daehli; McCullough and Blackett became leaders; Grimshaw, Rothwell and Pearson all did well to return from long-term injuries; and Sam Byrne, the only striker in the squad and one of the youngest members, grew in stature, quality and the cleverness of his positional game.

The experience gained by the cup run will serve the squad well. The majority of those who played were first years as the likes of Hendrie, Ekangamene and goalkeepers, Jacob and Coll, were ousted by younger players. More importantly, there’s some quality. The FA Youth Cup represents the only real time when McGuinness will pick his strongest team rather than rotate like in the league. That quality was reaffirmed as both an U19 side and an U17 side got the finals of prestigious global youth tournaments recently, in America and Holland respectively.

Having praised various players, McGuinness and his staff should also get some attention. After Sir Alex, Paul has potentially the hardest job in the club – producing players for the first team and preparing them both tactically and as young men. It’s the tactics though that’s particularly important. The first team have started to try and play a 4-2-3-1 system and both McGuinness and Warren Joyce have perfected it. They have technically sound players playing in an incredibly fluid and exciting system who’ll graduate through the levels and will be ready to play that way for the first team should they make it that far. United are importantly now matching football trends worldwide, coaching players to play primarily this way. Paul has implemented it perfectly, is winning playing it, and, he’s taught small players who were once bullied off the ball how to use their skills to their advantage.

Some would look at the season and bemoan a lack of silverware but when you look beyond the results, particularly in the league and watch the way the players have developed and grown-up, there’s much to be pleased with. A minimum of seventeen of the squad will still be in the Academy next year in what could well be a successful season given the strong group of players. Even with league games left to play, it’s a big well done to Paul McGuinness, the staff, and the players – some of whom may even be rewarded with (further) Reserves outings before the season is done. 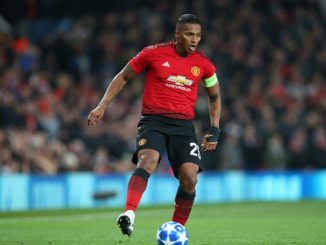