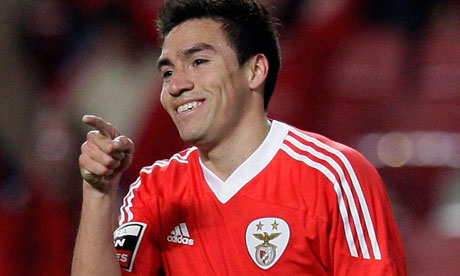 United have been linked with Nico Gaitan of Benfica for some time but today Portuguese sport paper, O Jogo report that any signing may see players leave the club.

Whilst O Jogo acknowledge that the deal is not yet finalised, they confirm that United would part with €25m for the Argentinian attacking midfielder/winger. Gaitan has a release clause of €45m which has put United off doing any deal but the paper says Benfica would be keen to take players from United either permanently or on loan.

O Jogo suggest that any two from Macheda, Petrucci or Bebe could well be offered as a part-exchange to Benfica but that is purely speculation on their part.

Jorge Mendes, as ever, is at the centre of any negotiations and United have been trying to move quickly after a series of good reports from Toninho Cruz, United’s scout in the region.

Don’t expect to hear anything official on a deal should it be done… no transfer would be announced until the middle of May at the earliest but the continued links to attacking midfielders has to be an encouraging sign for United fans.

24 Comments on Bebe, Macheda or Petrucci could leave as part of any Gaitan transfer