United travelled to Norwich knowing that City had won the day before. Rooney didn’t travel but United were able to call upon Ryan Giggs for the 900th time in his United career. An attacking line up saw a 4-4-2 away from home, a far and welcome cry from the 4-5-1 system that has been seen all too often in the past 18 months.

Here we discuss the talking points of the game and invite Norwich fans to join in the discussion below.

Javier Hernandez isn’t quite having a ‘Torres’ of a season, but the Mexican’s form is starting to worry both Sir Alex and fans alike. He had a sensational debut season for the Reds, notching important goals versus the likes of Stoke, West Brom and of course, Chelsea. However this season, the pacey number 14 seems to be finding the terrain a little harder to manipulate; and yesterday was a case in point as he struggled to assert any influence of any note – having just one shot on goal and generally looking like a player who has just risen from the Primera Division de Mexico.

Indeed the centre forward was very lucky to start the game, despite Rooney’s absence, given the erratic form he has displayed in recent games. Contrast his passing contribution to that of Welbeck’s (albeit that Hernandez was substituted on 59 minutes) versus the Canaries (see chalkboard below), we can immediately see the issue at hand; if United aren’t able to have the freedom of the midfield, and thus the freedom to release Hernandez who likes to play on the shoulder of the last defender, he isn’t able to adapt accordingly, and his inability to keep possession and play the right ball in deeper positions is telling – hence the inclusion of the more articulate (and equally pacey) Welbeck in ahead of him in the last ten games or so.

Hernandez isn’t quite at the point of emulating Egyptian striker Amr Zaki, who clearly was a ‘one-season wonder’, and he has scored 8 goals in 21 appearances in a stop-start season thus far; but nonetheless his form is a worry as we enter that pivotal squeaky bum time. As the Blizzard t-shirt slogan goes, ‘Goals are overrated’, and when measuring the contribution of Chicharito, Ferguson seems acutely aware of his overall influence and will continue to select accordingly. Until he can re-discover his confidence and become the player we know again, he will be used predominantly against the lower placed teams at Old Trafford. (What is of note, is that without Rooney, Hernandez tends to prefer a fairly central and right starting position on the field; perhaps he could have greater success by starting from a left side position, thus better able to come in on his natural foot, whilst simultaneously allowing Nani and Evra to overlap and create in the final third.) Luckily for Hernandez then, he has already won over the fans at United, because they are not known for their patience. Just ask Berbatov.

Recent games have seen De Gea lauded for excellent saves that have arguably helped to win games for United. Norwich once again saw him nominated as the United social media faithful’s man of the match, and rightly so. However we saw a very different ‘Big Dave’ on this occasion.

Despite initial concerns about his goalkeeping ability – errors were to be expected – patience was preached. The recent injury to Lindegaard maybe was a blessing in disguise for David – after some time as second choice keeper he was thrust back in and hasn’t looked back.

A physical challenge was expected at Norwich – lots of crosses for target-man, Grant Holt. The tone was set early on though with De Gea coming for two crosses inside the opening five minutes and catching the ball confidently. It wasn’t that he was kept busy throughout the game but the three or four saves he had to make were executed superbly.

What was both impressive and encouraging though was his commandment of the penalty area. From corners and crossing his decision making in choosing when to catch and when to punch was spot on and his handling was more than assured. He looked like a confident goalkeeper – potentially freed by the lack of challenge to his spot from the injured Lindegard. Maybe it’s the fact that he’s now had a few games behind the solid Evans-Ferdinand partnership – familiarity can only help.

At last, United had an all-rounded flawless (if you’re being picky, his kicking could have been better but the pitch was bobbly) performance from David. After a tricky seven months he’s finally settling and beginning to win United points.

The return of Scholes has somewhat reduced the responsibility on Carrick who was having to both anchor, defend and set the tempo of United’s play. Scholes now does the latter task and has taken on the playmaker role whilst Carrick has been freed to shield the back four and link play. The beauty of having two controlling, ball-playing central midfielders is that we can at last use them to our advantage because the movement ahead of them is superb.

Hernandez may have had a poor game as already has been touched upon but his movement as ever was superb; dragging defenders all over the place. Behind him, Danny Welbeck has become a genuine top quality striker. Not only is Danny’s work-rate superb but his ability to find pockets of space seems to come naturally to him. His constant dropping deep off Hernandez gave Scholes a good target to find. Upon receiving the ball though he looks to move it on as soon as possible before spinning and making a forward run. Important goals and work rate are great but at 21, Danny’s a clever footballer who’s no doubt benefiting from having Scholes and Carrick behind him.

The fascinating thing about Scholes being partnered with Carrick is the obvious trust between them. Since his return in January, Scholes seems to be getting into the final third of the pitch more than he has done for the past few years. He knows he can make his trademark late runs into the box because Carrick, as ever, is disciplined and sitting deep covering. 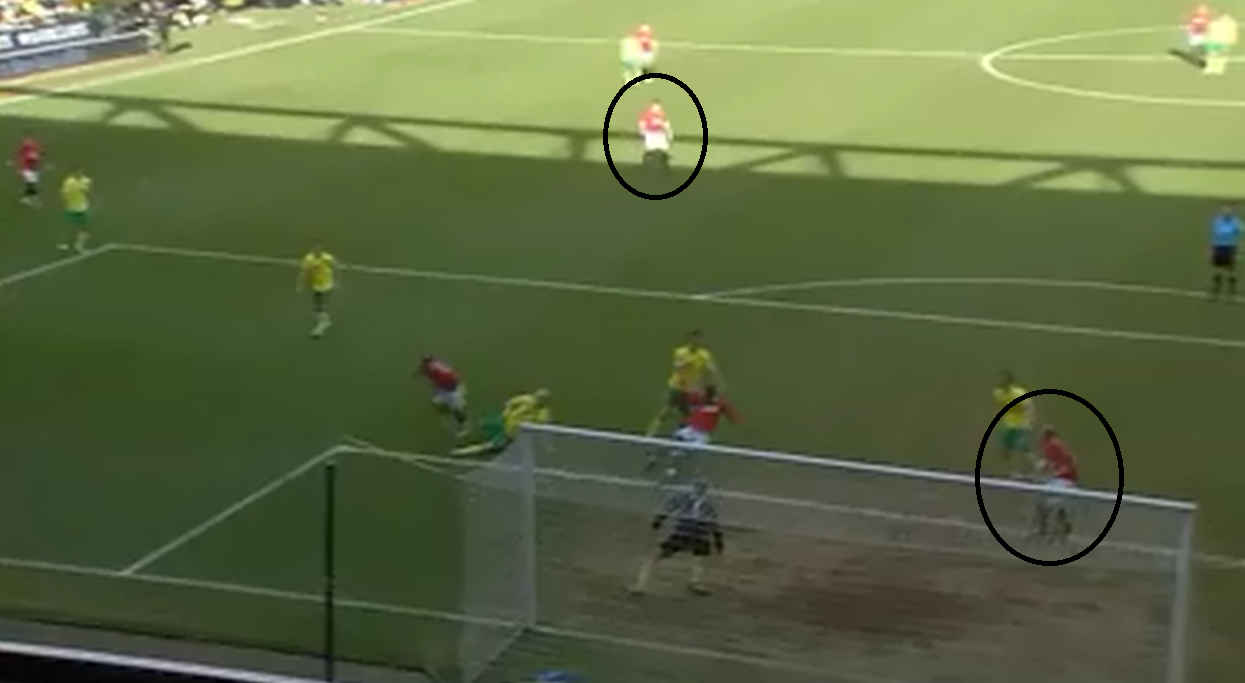 As seen for the opening goal (above), Scholes’ late run into the box was timed perfectly and in the background, there’s Carrick sitting in space to cover any Norwich clearance or break-away. It’s not a fluke either, the same pattern was seen for Scholes’ goal against Bolton and his header that he should have scored against Liverpool.

The control and move pattern that the trio of Carrick, Scholes and Welbeck have is a fascinating partnership which can only become more dangerous with the return of Rooney.

It was his 500th Premier League start as well as his 900th appearance. Starting on the left just like the old days, Giggs drifted inside throughout the game, linking up with Welbeck particularly well. As recent games have gone for him, he made a few errors and gave the ball away but he still is making the key difference in games.

It could have been any of four moments in the second half that did it – the dink through to Welbeck to score (well, miss); the effort he hit the bar with; the perfect cross that Welbeck somehow failed to meet; but ultimately it was the very last one – the late run and smart finish at the back post in the 92nd minute. Lost in the euphoria post-goal was the recognition of how good the ball in from Young was or how well timed and finished Giggs’ run and attempt were.

As Stewart Gardner said in the MUTV commentary, “who writes his scripts?” – it couldn’t have been a more perfect way to cap his 900th appearance. The celebrations were wild, Jones, Evans, Ferdinand and Welbeck went mental in front of the away fans whilst Giggs looked prepared to whack his shirt off and swing it around his head again. Fantastic scenes, the grand old master is still doing it.

A bit of a bizarre one but statistically, United are more dangerous at the start of games than at the end. This season United have scored 21% of their goals in the last ten minutes yet they’ve conceded 23% of goals in that same time frame. Compare that with the start, they’ve scored 10% of their goals then but only conceded 5% then.

Maybe it’s to do with lack of concentration or complacency but it’s not necessarily a statistic one would have thought to associate with United. Grant Holt’s superb strike for Norwich is just one of those this season that’s been scored late on – fortunately United found it easy to go up a gear and get the crucial second goal to win the game.

Paul Lambert deserves a lot of credit for his side’s performance, and also because of his astute tactical change 25 minutes into the game, and subsequently a change in personnel at half-time (reverting to the diamond in midfield) which allowed Norwich the ascendancy in the game. United had started with a steely panache with Scholes and Carrick once again coming to the fore. The back line seemed to carry forward their confidence from the Liverpool game, with Rio leading the way, calm in possession and alert to any danger posed by Holt and Jackson. However, Holt’s turn and shot, reminiscent of Welbeck’s stunner versus City at Eastlands, was due reward for some lax finishing on United’s part, and very harsh on man of the match De Gea who was otherwise exemplary.

Fergie will be happy with the progress of Nani, who seems to be gradually finding his match fitness, and assisted yet another goal; Welbeck’s movement (if not his finishing) was once again superb and Giggs, as in the games versus Liverpool and Chelsea displayed a calmness of mind and the leadership of the great Cantona at such a pivotal moment – scoring the last-minute winner in what was his 900th appearance for Manchester United, at a time when City thought they had edged closer to the league title the media so desperately wants to award her. 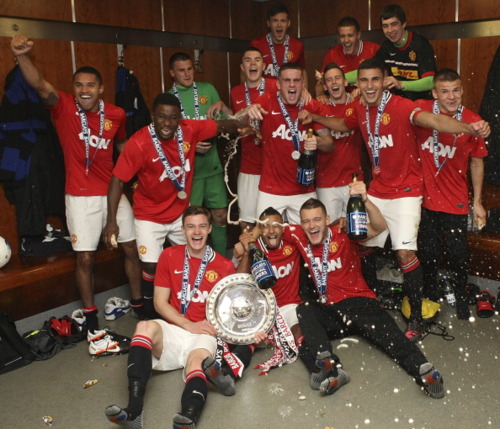 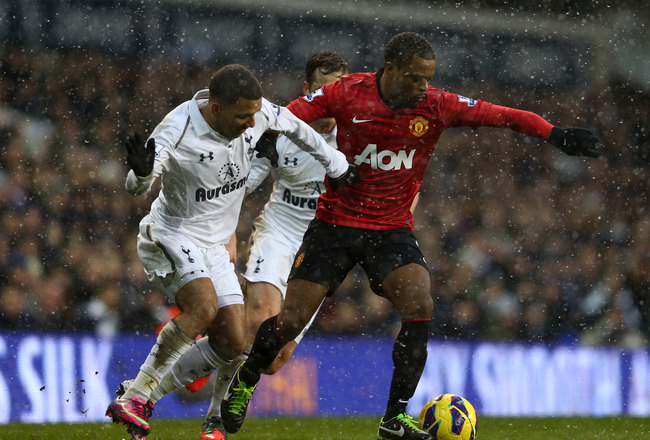 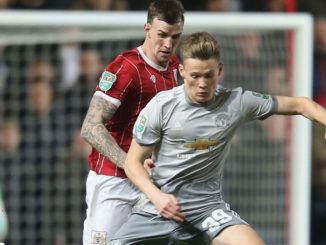